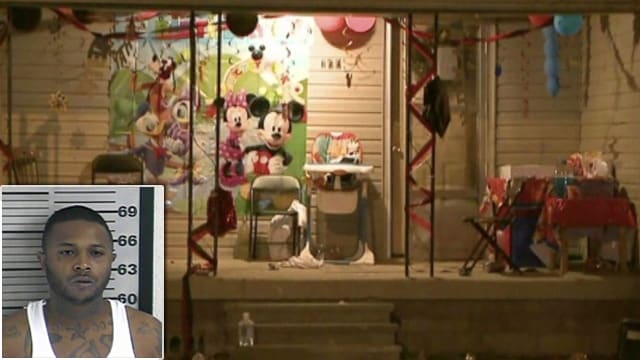 The scene of a fatal shooting at a 2-year-old’s birthday party Thursday night. Torius Russell, 30, (inset) has been arrested and charged with first-degree murder. (Photo: WREG)

Police in Tennessee have arrested a man and charged him with murder following a deadly shooting at a 2-year-old’s birthday party Thursday night.

Friends and family were gathered in front of a home in Dyersburg around 6 p.m. Thursday when shots rang out. The birthday boy’s mother, 21-year-old Shanice Amerson, was killed, and seven other people were injured. The Dyersburg Police Department announced early Friday that Torius Russell, 30, has been charged with first degree murder in connection with the shooting.

A 6-year-old boy is in critical condition following the shooting. The victims range in age from 6-38.

According to the Dyersburg State Gazette, Russell walked up to people at the party and started shaking hands before opening fire.

About an hour and a half before the shooting, someone called police and told them people were driving around the area and flashing guns. When police stopped cars in the area, no guns were found.

Dyersburg Mayor John Holden confirmed there was an incident at the same home hours earlier, according to WREG. Authorities say they do not believe the shooting was a random act of violence.

Earlier, police said they were looking for as many as three suspects.