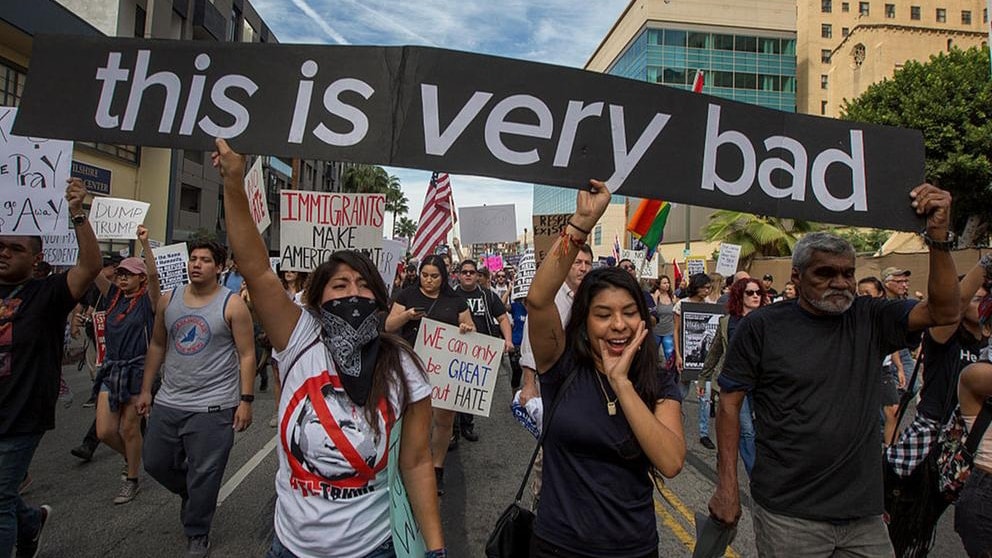 Bob Owens, editor of Bearing Arms, in a blog post Friday, said it would be an “understatement” to say the political left “isn’t taking Trump’s victory very well,” referencing the slew of ongoing protests in Portland, Los Angeles, Chicago, Washington D.C. and other cities nationwide — a few of which have turned violent and destructive.

“This has led to the interesting situation of many progressives who had cheered on Hillary and her radical anti-gun campaign now determining that they’re not so anti-gun anymore,” he said. “Instead, they’ve been motivated by fear to buy guns for self-defense.”

Owens then quotes another blogger, Larry Correia of Monster Hunter Nation, who published “A Handy Guide For Liberals Who Are Suddenly Interested In Gun Ownership” on Nov. 14, imploring Americans shocked, saddened and frightened of a country influenced by what they believe is Trump’s racist, misogynistic rhetoric, to defend themselves the same way gun owners have for centuries.

“Judging by your social media over the last few days many liberals have been utterly terrified that your government might turn tyrannical or that evil people will now be emboldened to hurt you,” Correia said. “I’m going to let you in on a little thing the other half of the country is familiar with to keep those unlikely, yet catastrophic, events from happening. And that my lefty friends, is 2nd Amendment.”

Owens, Correia and other gun rights activists have been accused of distastefully stoking fears in order to drum up sales — as a Trump win has been tied to less hysteria over potential gun control and, as a result, a downturn in industry market shares.

But others, including liberal, self-professed “anti-gun” columnist Ernest Owens, said Trump’s victory has forced him to reconsider firearm ownership.

“Being black and gay, I no longer feel safe from the hate that’s running rampant across the country,” Owens said in a column published in Philadelphia Magazine on Nov. 15.

Owens said Trump endorsements from both the Klu Klux Klan and the Philadelphia police left him feeling as if “nobody is protected.”

“I never thought I would need a weapon, because I used to think there was enough sensible law enforcement and common sense in the world to keep me from needing one,” he said.

It’s sentiments like this Bob Owens of Bearing Arms said inspired him to create a list of firearms for new and inexperienced gun owners.

Owens first recommends bending the ear of a local gun range staff member to determine which of the National Rifle Association-sponsored safety courses would best suit a new owner’s needs.

“Believe it or not, the NRA’s primary focus isn’t politics, but firearms training,” he said. “They’re responsible for the bulk of entry-level civilian firearms training in the country, and much of the law enforcement training as well.”

Then, he offers a brief list of five guns he says work well for inexperienced first-timers, potentially with a fear of firearms in general, who need “simple to operate, low-recoiling guns.”

His list includes: a .22-caliber LR handgun, particularly Ruger or Smith & Wesson’s double action revolvers; a .22-caliber LR rifle, such as a Marlin 795 semiautomatic rifle; a “soft shooting shotgun” such as the Mossberg HS410; an AR-15; and an “actual fighting handgun,” such as the Glock 19 9mm.

Owens admits the list is “not exhaustive,” but just a starting point that addresses “certain concerns and common new-shooter hangups.”

Raw Story writer Tom Boggiani responded to Owens’ and Correia’s “mocking” tone by posting a list of gun violence statistics from the Brady Campaign to Prevent Gun Violence — such as 31 people are murdered with guns in the United States daily — insisting the bloggers failed to mention these “few salient facts.”

“Although we are disappointed that a candidate who ran his campaign on a message of hate, violence, intimidation, and fear will be the next President of the United States, the American people have spoken,” said Dan Gross, president of the Brady Campaign, in a Nov. 9 statement. “I only hope President-elect Trump recognizes that nine out of 10 Americans, regardless of who they supported for president, want to create a safer America by expanding Brady background checks to every gun sale.”