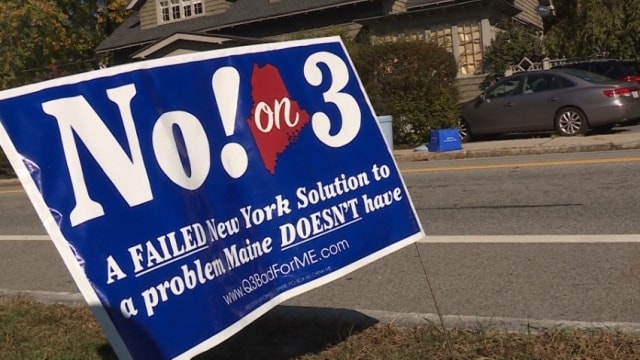 Maine’s ballot measure on guns had a bigger turnout than the presidential election. (Photo: WMTW.com)

In the only state that saw an anti-gun voter referendum defeated this year, Mainers showed up in greater numbers than to decide the fight for the White House.

This election cycle saw five different ballot initiatives make it to the polls across the nation as a result in a $33 million push by gun control advocates. When the smoke cleared the only one that was defeated was in Maine, where voters rejected a campaign to expand background checks to include most gun transfers – paid for in large part by former New York Mayor Michael Bloomberg.

While the state has voted Democrat in every presidential election since 1992, and kept that record intact this month by selecting former Secretary of State Hillary Clinton, more voters cast their ballot in the gun referendum than for chief executive.

As reported by the Portland Press Herald, 754,857 votes were cast for and against Question 3 — the gun control measure — with voters by a 52 percent margin selecting “No.” That’s about 2 percent more than the 741,550 recorded in the presidential race.

This was despite a UNH poll taken the week before Election Day that found only 43 percent of those surveyed were opposed to the measure.

The defeat of Question 3 preserved another Maine voting record — saying no to campaigns financed by out of state gun control interests to change local law. Ballot referendums in 2014 and 2004 to modify bear hunting methods in the state bankrolled by the Humane Society of the United States failed by similar margins as the Bloomberg effort.

Meanwhile, Gov. Paul LePage who was a vocal opponent of Question 3, has proposed to amend the state constitution on citizen’s referendums, which could make a repeat attempt more complicated. LePage is suggesting that signatures collected for referenda be gathered proportionately across each of the state’s counties.

“The problem is that all the signatures can come easily from one part of the state — and it’s usually Portland and Southern Maine,” said LePage in his Nov. 15 weekly statement.

For Question 3, proponents paid Fieldworks, a professional canvassing organization based in Washington D.C.,  $572,094.87 to collect the 61,123 valid signatures needed to certify the measure for the ballot, or about $9.36 per signatory. Fieldworks’ field offices for the campaign were set up in Portland and Bangor.

Further, signature collectors may have had to work hard to find support in a state where one in five residents has a hunting license and extended loans of guns under the proposal could have violated the law. As noted by Ballotopedia, the amount per signature gathered in Maine was almost twice the $5.63 national average “cost-per-required-signature” for measures that qualified for state ballots.

The referendum was also not embraced by law enforcement. While the majority of Maine’s elected sheriffs and the state game warden service opposed the proposition, Portland Police Chief Michael Sauschuck was one of the few law enforcement officers to support it.

“If the citizens disagree with the decisions made in Augusta, they have the right to speak at the ballot box,” said LePage. “However, we must make sure out-of-state money pouring into one part of the state does not control our desired way of life.”