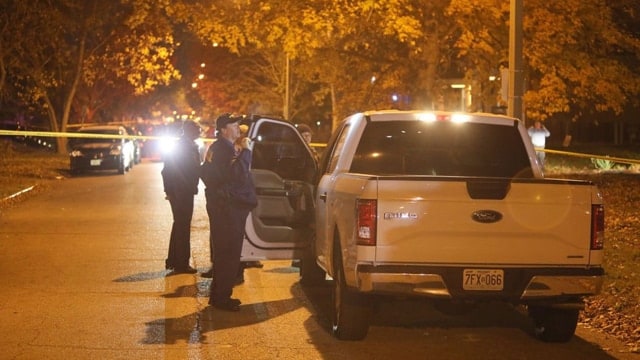 Officers on the scene of a shooting in St. Louis that left a police shooting suspect dead. (Photo: David Carson/St. Louis Post Dispatch)

Police in St. Louis shot and killed a man early Monday after they say he shot at a police sergeant hours earlier.

The St. Louis Post Dispatch is reporting that 19-year-old George Bush III was killed in a shootout with police just before 1 a.m. Monday. Hours earlier, at 7:30 p.m. Sunday, police say a man pulled up next to a sergeant’s SUV and opened fire. Police say Bush was a suspect in that shooting. When he realized police were following him early Monday, Bush got out of the car and began shooting at police.

Police say the sergeant was shot in the face twice. The 20-year veteran was in critical, but stable condition. He’s expected to survive.

“He was targeted because he was a police officer,” Mayor Francis Slay said at a press conference at Barnes Jewish Hospital. “He didn’t stop anybody. He didn’t point a gun at anybody.”

When police arrived on the scene, he was sitting in his vehicle — buckled in, gun holstered. The sergeant said someone pulled up next to him and he thought they were going to ask him a question.

“The officer says he saw the muzzle flashes and felt the glass breaking in his window as the shots came through and struck him in the head,” said Police Chief Sam Dotson.

Dotson said he didn’t get a good look at the shooter and he didn’t have time to react.

St. Louis Police officers are now patrolling two officers to a car, according to the police chief.

The incident happened on the same day that a San Antonio officer was shot and killed in his squad car outside police headquarters.