Teens charged as adults in murder of congressman's grandson 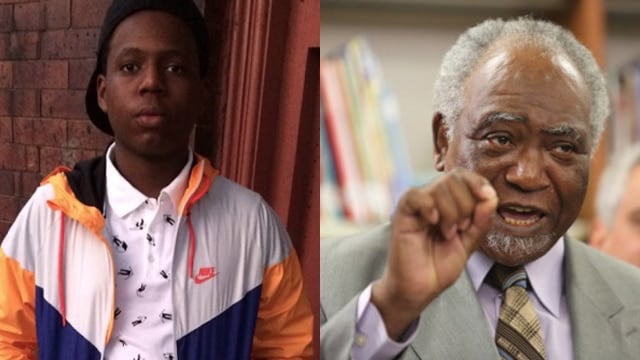 Two juvenile murder suspects have been charged as adults in connection with the shooting death of a congressman’s grandson in Chicago over the weekend.

Tariq Harris, 16, and Dijae Banks, 17, were ordered held without bail Sunday. They’re charged with first-degree murder after an argument about clothing escalated, and U.S. Rep. Danny Davis’s grandson, 15-year-old Javon Wilson, was shot in the neck, according to police and prosecutors.

“The murdering of a young boy over articles of clothing (and) gym shoes demonstrates a total callous disregard over the precious nature of human life,” said Cook County Judge James Brown in court on Sunday.

Assistant State’s Attorney Bryan Grissman said Wilson was at home with his siblings Friday night when Harris and Banks knocked on the back door of their Englewood home. Wilson’s younger brother opened the door a crack, telling them he didn’t want to give Banks shoes until he got his pants back. Banks and Harris forced their way into the home and started waving around a handgun.

Wilson and Banks punched each other, and then Harris shot Wilson in the neck, according to Grissman. They fled the scene, but later turned themselves in to police.

Rep. Davis says his grandson was a typical 15-year-old. “He liked basketball. If you listened to him he was a basketball star, but he liked basketball and music,” said Davis. “He was an avid sports fan, he knew all about, you know, the stats of different players.”

Davis told Politico he wants officials to declare a “state of emergency” in certain areas of Chicago with high crime and low employment. “I would call upon every unit of government to call a state of emergency need for these communities,” said Davis. “I think we need immediate help. We don’t need something that’s going to take five or six years.”

Davis said he doesn’t want a paramilitary state, but a formal declaration that would see resources quickly flow into areas where crime has reached levels not seen since the 1990’s. He says he wants funds for gang intervention efforts, after-school programs, tutoring, job placement and other services that could help communities like Englewood, where there’s 40 percent unemployment.

Chicago has seen more than 700 murders in 2016, the deadliest year in decades.