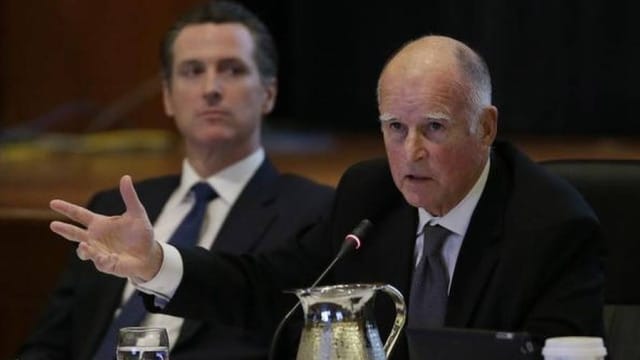 Gov. Jerry Brown, right, signed a host of new gun control bills into law this summer only to have Lt. Gov. Gavin Newsom, left, usher through his own set of proposals via voter referendum this month. (Photo: Eric Risberg/ The Associated Press)

California lawmakers and voters in 2016 passed multiple layers of new gun laws set to take effect over the coming years, but just exactly how they translate to practice is a bit murky.

Over a dozen gun control bills were pushed through the state legislature in an express train conducted by Senate President Pro Tem Kevin de León this summer. While Gov. Jerry Brown rejected a few, in the end he signed seven into law including a controversial “ghost gun” bill he had repeatedly vetoed.

Then came Lt. Gov. Gavin Newsom’s “Safety for All” voter referendum which, filed prior to the legislative push, largely duplicated several of the new pending laws while adding a mandate to require background checks prior to all ammunition sales. Listed on the ballot as Proposition 63, voters approved the initiative 63-37 in the general election earlier this month.

However, between the overlap of the legislation and the ballot initiative, and concerns over some of the laws’ constitutionality when compared to the Second Amendment translating to threats of lawsuits on the horizon, many on the ground are left confused as to what happens next.

The full text of Prop. 63 alone, which has been removed from Newsom’s committee website, is 15 two-column pages taking up some 2,900 words.

Among the more rigid requirements would be that the sale of ammo without a license would be a misdemeanor for any business or person selling more than 500 rounds per month. Internet sales, unless they use a local ammo vendor as a middleman, would be illegal. Those who want to purchase ammunition would need to get a four-year $50 permit, which would require a background check.

Eventually records on all sales and transfers of ownership of ammunition will be electronically transmitted to the California Department of Justice, though the means to do so currently are nonexistent.

While the ammo restrictions largely won’t be felt by the public until 2018 or later, other tenets of the new laws will be more immediate.

Those who own “pre-ban” magazines capable of holding more than 10 cartridges, even if grandfathered under past bans, will be in violation of the law after July 1, 2017. The only allowances to remain in compliance with the law are to remove the magazine from the state, sell it to a licensed firearms dealer, or turn it in to police.

Such raw components would have to be regulated in the state just like other guns including having a serial number registered with the Department of Justice, transferred through a licensed dealer, and fall under DROS fee schedules and waiting periods for first-time buyers. Moreover, it would require all homemade weapons currently in the state made after 1968 — and some even older — to have a serial number on file under threat of a $1,000 fine and six months in jail.

The magazine confiscation and mandates on homemade guns raises the specter of non-compliance, which is often seen in arbitrary bans.

Recently, in Connecticut, just 50,000 guns deemed by the state to be “assault weapons” out of an estimated half million in circulation were registered. On the heels of New York’s SAFE Act which expanded the state’s definition of banned weapons, just 44,000 were registered with the state out of an estimated 1.2 million thought to be in the Empire State. Prior to Prop. 63’s passage in California, gun owners rallied at the state capitol and promised they would not be handing over anything.

As for how the new sheaf of laws will affect guns on the market in the state, the California-unique bullet button has been banned, but other variants that mean to comply with the new  law are already on the market. While some gun makers have announced their last batches of some of their “California-compliant” rifles, with a market of some 13 million estimated gun owners in the Golden State, there likely will continue to be AKs and AR of various designs on store shelves that meet DOJs new guidelines.

“To make a long story short, Yes! California will innovate, just like we have every other time they banned ARs,” the FPC’s Craig J. DeLuz told Guns.com this week. “In 1990 we came up with ‘Off List Lowers.’ In 2000 we invented the ‘Bullet Button.’  2017 will be no different. Once the regs are out, we’ll know which of the already proposed or soon to be created innovations will allow California gun owners to own these firearms while remaining in compliance.”

What is is known and expected by the state, in a fiscal analysis of Prop. 63, is that tax payers will be on the hook moving forward for potentially tens of millions of dollars annually, related to new court processes, law enforcement and regulatory costs associated with the measure.