Zoo barrier wasn't up to federal standards at Harambe exhibit 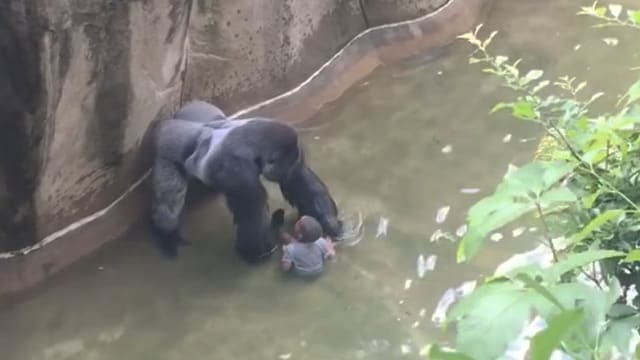 Cell phone video captured the moments after the 3-year-old fell into the gorilla exhibit at the Cincinnati Zoo in May. (Photo: Youtube)

A new federal report says the Cincinnati Zoo’s barrier at the gorilla exhibit wasn’t in compliance when a 3-year-old boy slipped and fell inside, leading to the shooting death of the now internet-famous Harambe.

The U.S. Agriculture Department report says the zoo was right to shoot the endangered 17-year-old gorilla, because the boy was in danger. But the report says the barrier was breaking down when the boy fell in, despite passing 38 years worth of inspections, including one a month before the incident.

Investigators say they found as much as an eight inch slack in cables that were part of the barrier.

Criticism of the zoo’s handling of the incident was swift, and they quickly upgraded the barrier, making it taller and adding nylon mesh as well as surveillance cameras.

The May 28 incident saw the zoo’s Dangerous Animal Response team arrive at the gorilla exhibit nine minutes after people called about the boy falling in. Harambe was dragging the boy by the leg, leading to a DART team member to fire one bullet at the gorilla. He died instantly.

The boy suffered no serious injuries.

“These findings do not change anything for us. We are thankful to the Lord that our child is safe and well,” the family said in a statement. “It was a tragic accident. We very much appreciate the quick actions by the Cincinnati Zoo staff, and mourn with them the loss of Harambe.”