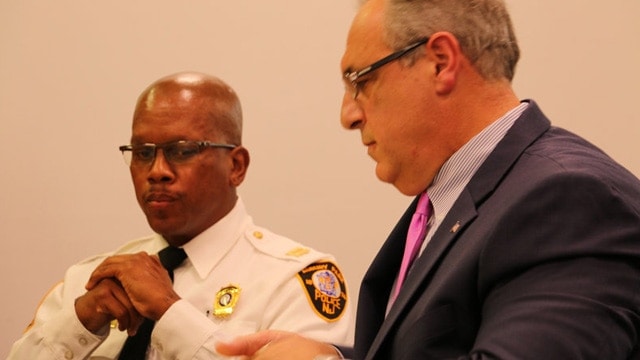 Marshawn Love, left, sits with his attorney during a hearing Friday. (Photo: NJ.com)

A police officer from Asbury Park, New Jersey, was demoted and suspended for taking a 7-year-old girl from a crime scene last year where she witnessed her father kill her mother. The officer, however, maintains he did nothing wrong.

Capt. Marshawn Love was demoted to sergeant and suspended for 120 days for the actions he took following the June 2015 incident in which off-duty Neptune police Sgt. Philip Seidle chased down and fatally shot his ex-wife, Tamara. After arriving on the scene, and with other officers present, Love took the couple’s young daughter away from the chaos and to the safety of the police station.

However, officials say Love’s actions were unacceptable not because he took the child, but because, they claim, he left the scene of a crime where he was the commanding officer. Love is charged with incompetency, neglect of duty and other charges, all of which were upheld during a hearing Friday. Love, however, maintains his innocence and says he was not the commanding officer on the scene when he left.

“We are clearly disappointed in the conclusions of the city, especially as they are not supported by the facts adduced at the hearing,” said Love’s attorney, Richard Incremona, following the Friday hearing. “The testimony and proofs offered, such as they were, lacked true substance and were exposed as such when challenged.”

Love plans to appeal the decision.

“Capt. Love helped save a little girl from harm during an unprecedented and harrowing incident,” Incremona added. “He should be lauded, not vilified. He has no record of wrongdoing but is facing severe punishment unjustly.”