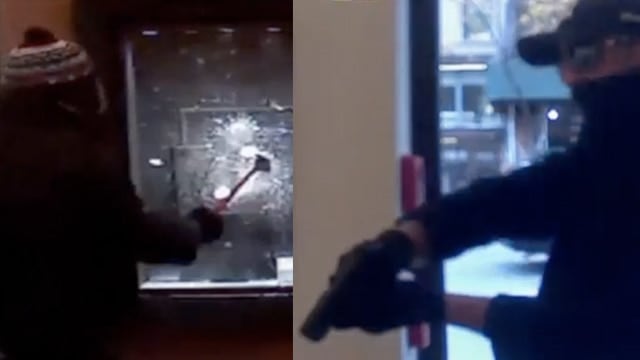 Surveillance video captured the two men as they held up a jewelry store Monday on Madison Avenue in New York City. (Photo: YouTube)

Police in New York City are looking for two men who robbed a jewelry store in Manhattan’s Upper East Side Monday morning.

The thieves walked into Jaeger-LeCoultre on Madison Avenue shortly after it opened Monday. One man pointed a gun at three people inside and told them to get on the ground while his accomplice smashed the display cases with a hammer, taking five watches worth as much as $300,000. The pair wore sunglasses and scarves over their faces, and one of the men was wearing dress pants.

According to one of the people inside the store, the robbers took a watch right off his wrist.

“I was robbed at gunpoint,” the victim, who was wearing a suit, told the New York Post as he walked out of the store after the heist.

The two men stuffed the loot in their pockets, hid their weapons and quietly slipped out of the store, heading south on Madison Avenue. No on was reported injured.

A day earlier, three thieves broke into a Versace store in Soho and made off with $60,000 worth of clothes and handbags.