San Antonio cop killer: ‘I lashed out at someone who didn’t deserve it’ 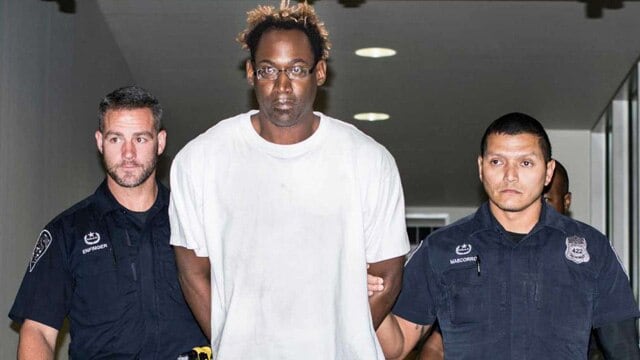 Otis Tyrone McKane, who is suspected of killing Officer Benajamin Marconi, is escorted to the police headquarters after his capture. (Photo: San Antonio News-Express)

The man accused of gunning down a San Antonio police officer in an ambush Sunday morning was captured late Monday afternoon. As he was taken into custody, the accused shooter expressed frustration over a custody battle, as well as remorse for killing the officer.

After a 30-hour manhunt, Otis Tyrone McKane, 31, was arrested on Interstate 10 around 4:20 p.m. during a traffic stop in which the SWAT team was involved. According to the San Antonio Express-News, a female and a 2-year-old child were also in the vehicle with McKane, although neither were publicly identified.

McKane was apprehended without further incident.

“We are relieved he was taken into custody without further loss of life,” said San Antonio Police Chief William McManus. “It’s a relief for a lot of us. Everyone’s looking forward to a good night’s sleep.”

As McKane was being taken downtown, reporters were on standby and McKane offered comment.

“I lashed out at someone who didn’t deserve it,” McKane said, as seen in video captured by local media.

“I’ve been through several custody battles, and I was upset at the situation I was in, and I lashed out at someone who didn’t deserve it,” McKane said again, adding he just wanted to see his son while apologizing to the slain officer’s family.

The details surrounding the custody battle were not immediately known, but there appears to be no connection between the battle and the officer who was killed.

McKane shot Detective Benjamin Marconi, 50, twice in the head as he sat in his car writing a citation for another individual on the back side of the police headquarters. Marconi, a 20-year veteran of the force who worked in the Special Victims Unit, was pronounced dead at a local hospital a short time later. McKane fled the scene, prompting a massive manhunt.

An investigation determined there was no connection between the driver who was being issued the citation and McKane. But authorities did learn McKane visited the police headquarters several hours before the shooting. Surveillance video showed McKane enter the building, talk with the clerk for about half a minute, then leave. Investigators do not believe McKane specifically targeted Marconi.

“I think the uniform was the target,” McManus concluded.