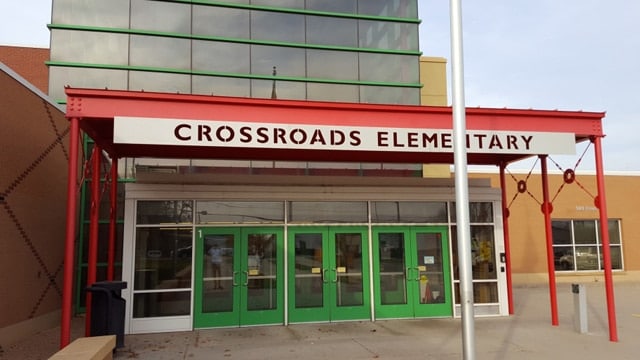 The nephew of 34-year-old Breanna Jones brought her gun to the Crossroads Elementary School on Nov. 17. No on was injured when another boy pulled the trigger. (Photo: Pioneer Press/Andy Rathbun)

A Minnesota woman was charged with child endangerment Tuesday after her nephew took her gun to school and it went off in a classroom full of first graders.

Breanna Jones, 34, of St. Paul allegedly left her .38-caliber Smith and Wesson revolver in a plastic bedside drawer, and her 7-year-old nephew found it and took it to school last week. No one was injured when a student pulled the trigger in the classroom on Nov. 17, but the bullet came close to hitting a boy in the foot.

When the teacher heard the gun go off, she looked over and saw it on the ground under a table full of students. She wrapped it in a cloth and brought it to the principal’s office.

Jones’ nephew told police he gave the gun to a boy on the bus. Police say that boy was playing with it in the classroom, and then slid it under the table to a second boy. The second boy pulled the trigger. He told police that “the bullet almost hit his foot and scared him,” according to the Star Tribune.

Jones told police she bought the gun three weeks before the incident at the school. Police say she has a permit for the gun. She and her husband said they didn’t tell their nephew about the gun, but he may have heard them talking about it.

Jones was charged via summons, which means she can turn herself in at a later date. She’s due in court on Dec. 16.

Ramsey County Attorney John Choi said the incident is a good reminder for parents who are gun owners.

“If you own a gun, it is not only your responsibility to lock up your gun and keep it stored safely away from children, it is the law,” said Choi.