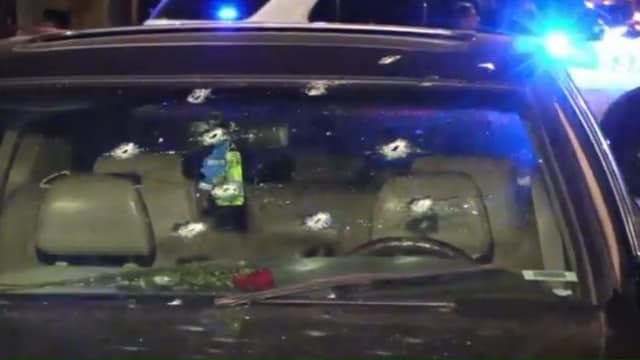 At least 10 bullet holes ripped through a car’s windshield after a shooting that left two kids and two teens injured Tuesday night in Chicago. (Photo: WGN-TV)

Two young children and two teenagers were injured when someone fired shots through the windshield of their car at a gas station on Chicago’s Southwest Side Tuesday night.

Police reported that a four-year-old boy suffered a graze wound to the arm and a three-year-old girl was cut by flying gas when someone in a dark SUV opened fire, leaving as many as 10 bullet holes in the windshield. A 17-year-old boy was hit in the back and is in critical condition, and an 18-year-old man was shot in the hand. There was also a two-year-old in the vehicle, but that child was not hurt.

Police say it happened just before 11 p.m. Tuesday in the 3500 block of South California Avenue in the city’s Brighton Park neighborhood. After the shooting, the teens drove a half mile south and ducked into a side street. Emergency crews responded and took them to the hospital.

No arrests have been made. According to the Chicago Tribune, police are looking into whether the shooting was gang related.

It’s been a violent Thanksgiving week in Chicago, with two people killed and at least seven others injured in shootings city-wide since Tuesday afternoon.