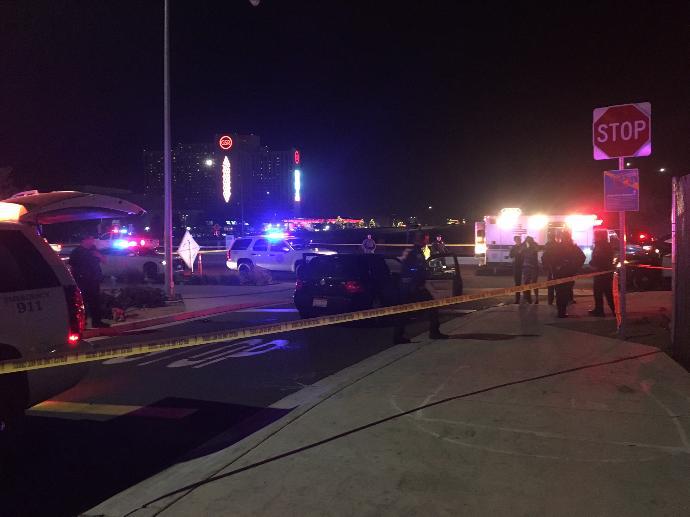 Police respond to a shooting near a Reno Walmart on Black Friday. In total, six people were shot in three states over Black Friday sales. (Photo: Chris Buckley/KOLO)

Black Friday turned violent as at least six people were shot over discounts and sales in Tennessee, Nevada and New Jersey.

The separate shootings — at a New Jersey’s Macy’s, two Tennessee malls and a Walmart in Nevada —  claimed two lives and injured four others. The victims were shot outside of the stores as shoppers geared up for holiday sales and deals on the one of the biggest days for retailers.

Demond Cottman, 21, of Atlantic City died outside Hamilton Mall in New Jersey after he was shot multiple times early Friday morning. Also found shot at the scene was Cottman’s older brother Shadi Cottman, 26. Shadi suffered a gunshot wound to the leg and was transported to a local hospital for treatment. He remains in stable condition.

Hamilton Mall issued a statement on the shooting saying, “Our thoughts and prayers are extended to victims and their families.” Authorities have not disclosed who fired the shots or what the dispute concerned.

A shooting in Reno Thursday evening just minutes after Black Friday sales geared up claimed the life of a 33-year-old man. Authorities say the dispute began as road rage as the victim and another shopper got into a dispute over a parking spot at Walmart.

After the initial confrontation, the drivers stopped their vehicles near the store’s exit and the altercation turned violent. One party was armed with what witnesses describe as a metal pipe and the other had a handgun.

The shooter initially fled the scene but was later found by police. Authorities say the investigation is still ongoing and no names have been released as of yet.

Three more holiday shoppers were shot in unrelated shootings in Tennessee. The first incident occurred at Wolfchase Galleria Mall in Memphis on Thursday evening. Derrick Blackburn, 19, shot a 21-year-old man in the parking lot of the mall. The victim was taken to a local hospital where he he was listed in non-critical condition.

The mall was open at the time of the shooting, with many stores offering early doorbusters ahead of Black Friday. Memphis police have yet to reveal the name of the victim or a motive for the shooting.

A second shooting happened Friday afternoon outside Hamilton Place Mall in Chattanooga. According to police, an argument started inside the mall and the parties involved moved the fight to the parking lot where two people were shot. The victims, whose names have not been released, suffered gunshot wounds to the arm and leg.

Authorities took one suspect into custody and detained one other for further questioning.