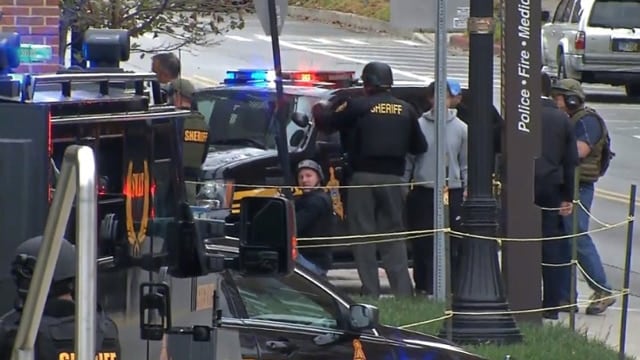 Campus officials at Ohio State University canceled classes for the day after authorities secured what was initially reported as an active shooter incident Monday morning, according to announcements from the university’s Department of Public Safety.

Authorities later confirmed the shots fired came from a university police officer who killed a man that drove into a group of people, exited his vehicle and began stabbing people with a butcher knife.

University police along with officers from Columbus Police Department and the Franklin County Sheriff’s Office issued an all clear around 10:30 a.m. central time, about an hour and a half after the university issued an alert about an active shooter.

According to reports, nine people were transported to the hospital by the Columbus Fire Department, but it’s unclear their conditions and injuries.

At around 9 a.m. central time, the universty alerted students to “Run Hide Fight. Watts Hall. 19th and College” on social media and advised students to take shelter or avoid the north campus area.

Gun rights advocates, who argue the availability of firearms act as a deterrent to crime, are quick to point out that those with a state-issued concealed carry permit are unable to bring firearms inside the classroom. However, under state law, they are allowed to keep a firearm in their vehicle.

On Nov. 29, 2015, almost exactly one year ago, the university experienced another shooting incident in which an employee committed suicide inside the Wexner Center for the Arts. Despite the incident occurring in an unoccupied building and on a Sunday, the school caught flak for lax communication about the incident to the student body.