Muslims told in anonymous letters ‘pack your bags and get out’ 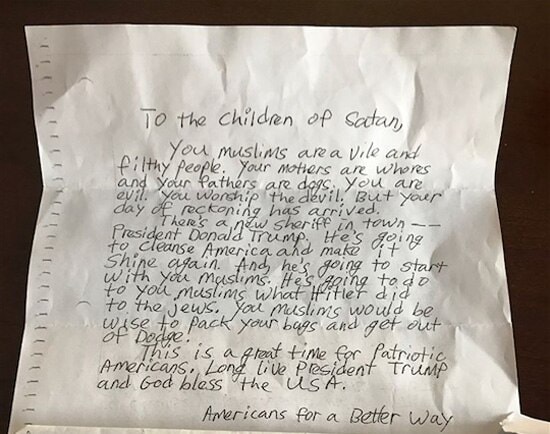 The letters were photocopied, with a postmark out of Santa Clarita, California. (Photo: Center for American-Islamic Relations)

Authorities are investigating after anonymous hate-filled, anti-Muslims letters were mailed to multiple mosques last week, warning they should pack up and get out while indicating a Nazi-style genocide is imminent.

Leaders at the Long Beach Islamic Center, the Islamic Center of Claremont, and the Evergreen Islamic Center in San Jose all said they received the letters, and according to a statement by the Georgia chapter of the Council on American-Islamic Relations, the letter was also sent to a mosque in Savannah, Georgia. There are also reports of a mosque in Cleveland receiving the same letter.

All of the letters sent to the mosques were identical photo copies. They were addressed to “the children of Satan” and called Muslims “vile and filthy people.” The letter goes on to say, “Your day of reckoning has arrived,” and warned that President-elect Donald Trump is going to “cleanse America” and “start with you Muslims.” The letter also stated Trump is “going to do to you Muslims what Hitler did to the Jews” and urged Muslims to “pack your bags and get out.”

Faisal Yazadi, president of the Evergreen Islamic Center board of directors, said he wishes that whoever sent the letters would engage in an open conversation.

“Our doors are never locked,” Yazadi said. “I hope that person knows that we’re more than happy to have a dialogue. Hopefully, we learn a thing or two from him or her, and he or she learns something from us.”

Yazadi said their mosque has never dealt with such an incident, but that the outpouring of support has been overwhelming.

“Without their support I don’t think I’d be talking to you so strongly now,” Yazadi told the San Francisco Gate.

The San Jose Police Department confirmed they have opened an investigation into the incident, which is being described as “hate-motivated,” according to the department’s spokesman, Sgt. Enrique Garcia.

Likewise, Zahra Billoo, executive director of the Bay Area chapter of CAIR, said she is grateful that the letters were “just words,” rather than actual violence.

“In some ways it’s a threat from the individual,” Bilboo explained. “But in other ways it attempts to threaten the community through the power of the presidency.”

Bilboo also praised law enforcement for their quick response to the incident.

“Whoever sent these letters should know that they have only strengthened our resolve to keep practicing our faith, defending our rights and building bridges with our neighbors,” Mitchell said