Protecting Trump and family in NYC proves challenging… and expensive 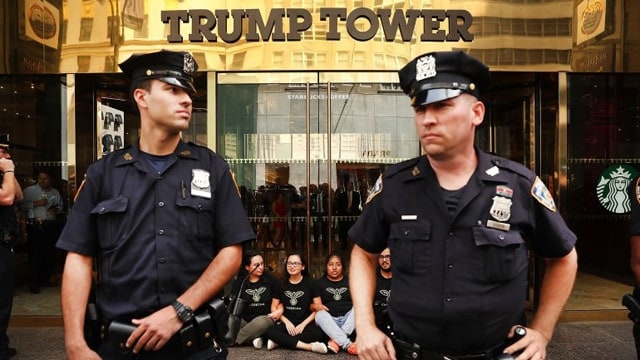 Trump Tower is a 68-story building in the heart of New York City and includes a mix of high-end residential, commercial, and retail spaces. (Photo: WGN)

Keeping President-elect Donald Trump and his family safe in America’s largest city is rife with a number of unique challenges and is reportedly costing New York City more than $1 million a day.

There are a number of details that add to the costly security, including the fact that Trump’s residence atop the famous Trump Tower is right smack in the middle of one of the most densely populated neighborhoods in the most populated city in the country.

The Secret Service is tasked with protecting Trump, along with his wife, Melania, 10-year-old son, Barron, Trump’s adult children – who have worked closely with the president-elect throughout his presidential campaign – as well as Trump’s grandchildren. But local law enforcement is responsible for providing assistance to the Secret Service, as needed, when the president – or in this case president-elect – is in the city. However, with the entire Trump family residing in New York City, law enforcement is working overtime to ensure they are all protected.

“The number one imperative here is safety and security. We owe that to the president-elect, his family and his team,” said New York Mayor Bill de Blasio during a recent press conference.

Typically, where safety is concerned, local law enforcement focuses on any problems which could arise with the general public. In the days and weeks following the election, hundreds of protests and riots have broken out across the country, as security around Trump Tower has intensified. Numerous patrols have been added to the area, as barricades have been set up around Trump Tower, roads have been blocked and traffic rerouted. Furthermore, every time Trump travels through the city, traffic is rerouted accordingly.

De Blasio noted that it’s a costly service, to the tune of more than $1 million a day. “This is a very substantial undertaking. It will take substantial resources,” de Blasio said. “We will begin the conversation with the federal government shortly on reimbursement for the NYPD for some of the costs that we are incurring.”

However, at this point, it’s not entirely clear whether those figures are likely to change in coming months. Trump previously indicated a full-time move to the White House – which is a less than 45-minute flight from New York – wasn’t necessarily in his plans, and last week confirmed that Melania and Barron would stay in New York, at least long enough to allow Barron to finish out the school year.

De Blasio also said that New York City, although it’s been the location for a number of high security events and temporarily hosted numerous world leaders, has never before had a president who would be in the city “on such a regular basis.” But while it’s an unprecedented undertaking protecting the future First Family in New York, de Blasio indicated it was a challenge his city was willing – and able – to tackle.