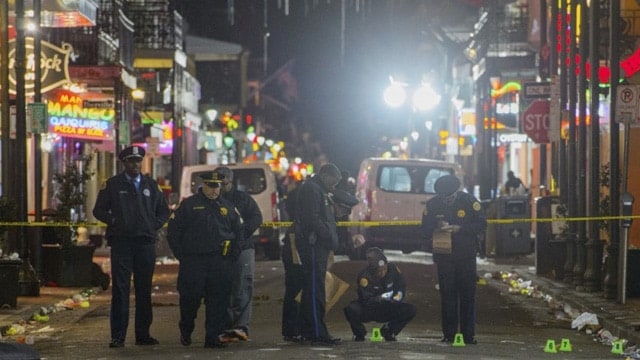 Police in New Orleans are looking for two people in connection with a shooting early Sunday that left one man dead, and nine other people injured.

It happened around 1:30 a.m. Sunday at the intersection of Iberville and the famous Bourbon Street in New Orleans’ French Quarter. Police say the man who was killed, 25-year-old Demontris Toliver, was not an intended target of the shooting. Neither were the seven other men and two women who were shot early Sunday.

Two people have been arrested for illegal carrying of a firearm, but neither are suspects in the shooting. Police Superintendent Michael Harrison says the argument migrated to Bourbon Street and “turned to a shootout.”

“They made a choice to endanger the lives of thousands of visitors and residents who were in the area,” Harrison said of the shooters. “I’m confident we will track down those responsible for the crimes. We will hold them accountable for their actions.”

Police say the two shooters were allegedly unharmed, and fled on foot, evading increased patrols that were in the area for a football game. Harrison says agents with the ATF and FBI are aiding in the manhunt.

“We’re going to pursue these individuals very, very aggressively,” said New Orleans Mayor Mitch Landrieu. “The violence continues to spin out of control with people brandishing weapons whenever they think they can. It’s really unfortunate.”

The victims range in age from 20 to 37 years old. Five of them had been treated and released from area hospitals as of Sunday night. The other four are expected to fully recover.

The man killed, Demontris Toliver, was a tattoo artist from Baton Rouge. His death marks the 162nd homicide in New Orleans this year.

In 2014, a nursing student was killed and nine other people were injured in a shooting on Bourbon Street. One of the shooters was sentenced to 60 years, while the other suspect still hasn’t been identified.