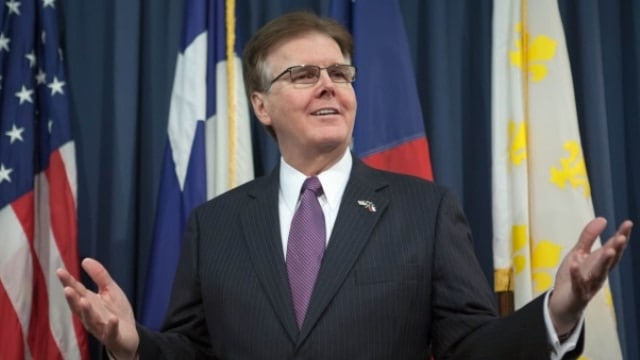 As president of the 31-seat Texas Senate, Lt. Gov. Dan Patrick has a list of bills he wants lawmakers to tackle first in 2017 — including one on concealed carry reform. (Photo: ltgov.state.tx.us)

Among the low number, high-priority pieces of legislation backed by Texas Lt. Gov. Dan Patrick for 2017 is one reducing the handgun licensing fee in the Lone Star State.

Patrick, a Republican, announced the measure last week as a follow-up to his top 10 proposals to the state senate tackling everything from the budget to ending sanctuary cities and partial birth abortion.

“Texas currently has one of the highest license to carry fees in the country, and we will fix that,” noted Patrick about his SB 16 – License To Carry Fee Reform act, which “will continue to support 2nd Amendment rights by making lawful carry more affordable for the average law abiding citizen.”

Patrick, who introduced a successful campus carry bill to the senate last session and shepherded it through to law, has not prefiled SB 16 for the 2017 session as of Monday morning so it is not clear just how much he intends to drop the current fees.

While active duty military and prosecuting attorneys in the state can obtain a free permit, and retired law enforcement, military veterans, judges and senior citizens pay discounted rates, the typical fee for a license to carry a handgun in the state is $140.

With over a million residents currently licensed under a scheme signed into law by then-Gov. George W. Bush in 1995, Texas is second only to Florida in the number of permits issued. When compared to the state’s population, this is one active permit per about 27 residents.

In the House, Republican state Rep. Jonathan Stickland has pre-filed a constitutional carry measure to strike the state’s framework for a concealed carry permit entirely. This would allow all adults otherwise lawfully able to possess a firearm under federal and Texas laws to carry one concealed without a permit.