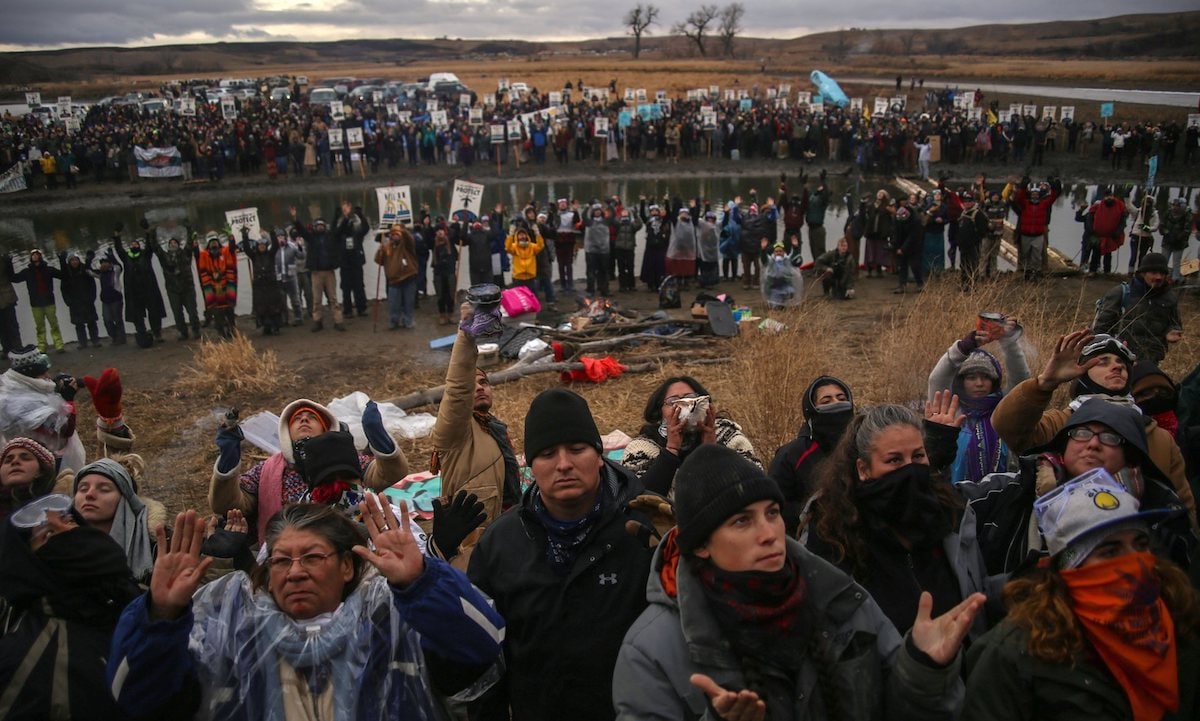 Federal officials have stepped in to quell rising violence between Dakota Access pipeline protestors and police, ordering the evacuation of the main encampment established by activists.

The order came by way of letter to the Standing Rock Sioux tribe by Army Col. John W. Henderson of the Army Corps of Engineers. Citing federal regulations governing public lands, Henderson wrote to tribal chairman Dave Archambault ordering the closure of land north of the Cannonball River on Dec. 5.

“I do not take this action lightly, but have decided that it is required due to the concern for public safety.” Henderson said. “This decision is necessary to protect the general public from the violent confrontations between protestors and law enforcement officials that have occurred in this area, and to prevent death, illness, or serious injury to inhabitants of encampments due to the harsh North Dakota winter conditions.”

Henderson added that the Corps has already established a “free speech zone” on land south of the river for protestors to gather and “peaceably protest the Dakota Access pipeline project.”

Anyone found on land north of the river past the early December deadline will be considered trespassing and subject to local, state and federal prosecution according to the letter.

Archambault said in a statement that the tribe is saddened by the letter, sent just after Thanksgiving.

“Our tribe is deeply disappointed in this decision by the United States, but our resolve to protect our water is stronger than ever,” Archambault said. “It is both unfortunate and ironic that this announcement comes the day after this country celebrates Thanksgiving – a historic exchange of goodwill between Native Americans and the first immigrants from Europe. Although the news is saddening, it is not at all surprising given the last 500 years of the treatment of our people.”

Archambault called on President Obama and the Army Corps of Engineers to reconsider the Dakota Access Pipeline and deny the easement to cross the Missouri River north of his tribe’s reservation.

The $3.8 billion Dakota Access pipeline, owned by Energy Transfers Partners LP, would stretch across 1,172 miles from North Dakota to southern Illinois. The project, which would transport crude oil, hit a roadblock after demonstrators protested the pipeline’s proximity to water resources and sacred Native American sites.

The Obama Administration postponed the project in September to review pipeline plans and consult tribal leaders; but the stall led to escalating violence and tensions between activists and law enforcement.

Authorities have turned to pepper spray, tear gas, rubber bullets and water hoses to disperse demonstrators. Last weekend, law enforcement drew ire after water cannons were turned onto 400 protestors in subfreezing temperatures. Twenty-six people were hospitalized and hundreds more were injured after the clash, according to the Standing Rock Medic and Healer Council.

“It was horrific,” one protester told CNN. “It was a horrific scene.”

One of those grenades landed near New York native Sophia Wilansky, who was handing out bottles of waters to fellow demonstrators. The grenade detonated, according to witnesses, severely injuring Wilansky’s arm.

“She was air lifted to County Medical Center in Minneapolis were she’s currently undergoing extensive, hours-long surgery from injuries sustained from the blast,” said a GoFundMe page raising money for the 21-year-old’s medical costs.

Initially, fellow demonstrators were fearful Wilansky would lose her arm but her father told CNN affiliate KFYR that though the explosion “blew the bone out out of her arm” amputation wouldn’t be necessary.

“There is no merit to that,” Lt. Tom Iverson told KFYR. “But I assure the citizens of North Dakota … that law enforcement is investigating this. All the facts will be out there.”

As demonstrators decide whether to evacuate the main encampment or stay and test relations with local police, Archambault offered a simple solution to end the prospect of violence and protect both parties.

“The best way to protect people during the winter, and reduce the risk of conflict between water protectors and militarized police, is to deny the easement for the Oahe crossing, and deny it now.”