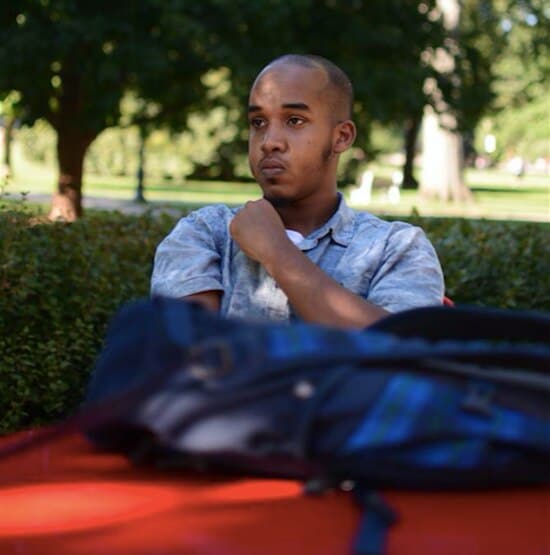 Abdul Razak Ali Artan, 18, was shot and killed as he attacked students with a knife at OSU Monday morning. (Photo: Kevin Stankiewicz / The Lantern)

An attack by a student at Ohio State University Monday morning left 11 people injured after the suspect plowed his car into a group of students before stabbing people with a large kitchen knife.

The incident was originally reported as an active shooter situation just before 10 a.m., and resulted in a more than one-hour campus-wide lockdown. It was later determined the gunshots heard by witnesses came from law enforcement.

OSU Police Chief Craig Stone said Officer Alan Haruiko was on the scene within a minute, “engaged the suspect and eliminated the threat.” At 12:21 p.m. the department confirmed that the suspect was deceased.

Artan, who was a Muslim, previously expressed concern over praying in public during an interview for the Lantern, the campus newspaper. “If people look at me, a Muslim praying, I don’t know what they’re going to think, what’s going to happen,” Artan told the publication.

Although officials have not disclosed a possible motive, they are investigating whether Artan was experiencing personal problems with anyone at the university or any other possibilities that could explain the attack.

Nicole Kreinbrink was walking down a nearby street when the attack unfolded. “This car just swerved and ran into a whole group of people,” Kreinbrink said. “All these people were running and screaming and yelling.”

Jacob Bowers, a sophomore at the university, was sitting about 100 feet away when the chaos erupted. “I heard someone yell, ‘He’s got a knife.’ And I saw a guy with a big-ass knife just chasing people around,” Bowers said. “When I saw that, I grabbed all my stuff and started running.”

Bowers said as he ran away, he turned to see Harujko make contact with the suspect. He said he heard Harujko yell at Artan to drop the knife or he would shoot, and Artan ignored the command and was subsequently shot.

“The man was going insane,” Bowers said of Artan.

OSU President Michael Drake called the incident “a violent and frightening act,” and asked for prayers for the victims and their families, while wishing them a speedy recovery.

“Days such as these test our spirit as Buckeyes,” Drake said in a statement, “but together we remain unified in the face of adversity.”

All classes are set to resume normal schedule on Tuesday.