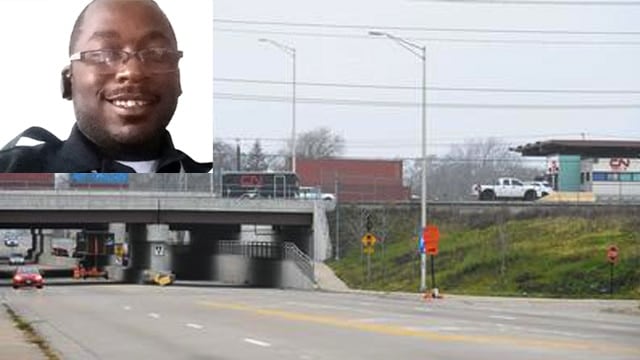 Police in Chicago’s south suburbs are looking for a man who shot and killed a Canadian National Railroad security guard on Saturday evening.

Police say the suspect stole a woman’s car around 4 p.m. She was able to get into another car and trail the man while on the phone with dispatchers. Police think he heard their sirens and got nervous when he crashed the car into a viaduct. He got out of the car and ran to the rail yard, where he shot 38-year-old Tyrone Hardin before stealing his car.

Hardin was shot in the abdomen and died later at the hospital. The shooter eventually abandoned Hardin’s security vehicle, and police are still searching for him.

“I cannot confirm or even deny whether the suspect was injured in any magnitude, but I will say, we collected a lot of data,” said Harvey Spokesman Sean Howard. “We’ve looked at all the surveillance tapes in the area and we’re continuing to do that to help find any little thing that can help take us further down the road.”

Hardin worked two security guard jobs, and is being remembered as a hard working father of six.

“He just needs to be caught and brought to justice,” Hardin’s stepson, Jawaun Thurston told WGN-TV.