Marines to outfit an entire battalion with suppressors in test 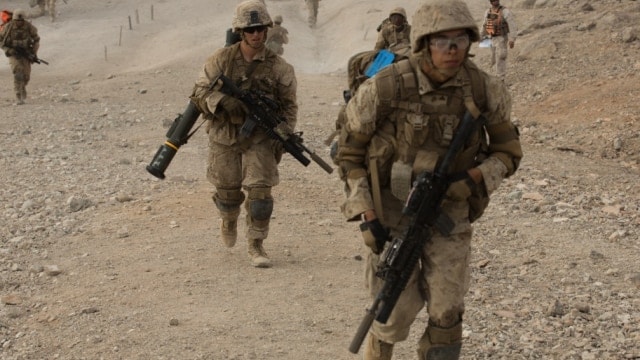 U.S. Marines with Bravo Company, 1st Battalion, 2nd Marine Regiment use suppressors while training in Twentynine Palms, Calif., Oct. 23, 2016. The Marines are experimenting with equipping all of the rifles and machine guns of an entire battalion with the devices. (Photo: Sarah N. Petrock/U.S. Marine Corps)

The U.S. Marine Corps is expanding its use of suppressors in a test that will see a full battalion using them on everything from service rifles to .50-caliber machine guns.

An infantry battalion of the 2nd Marine Division will have every element, from combat engineers to headquarters units, equipped with suppressed weapons in an upcoming experiment, Military.com reported. The concept has already been trialed so far this year in company-level exercises.

“What we’ve found so far is it revolutionizes the way we fight,” Marine Maj. Gen. John Love said. “It used to be a squad would be dispersed out over maybe 100 yards, so the squad leader couldn’t really communicate with the members at the far end because of all the noise of the weapons. Now they can actually just communicate, and be able to command and control and effectively direct those fires.”

Although military use of suppressors has become more widespread since Sept. 11, 2001, U.S. troops have been using the devices since their inception more than 100 years ago. As far back as 1908, the Army bought 100 Hiram Maxim’s Silencers for testing alongside a similar design by Robert A. Moore on the 1903 Springfield rifle before ordering another 9,300 of Maxim’s cans in 1917. Tests of the Maxim at the School of Musketry more than a century ago found the silencer gave the following advantages: reduced recoil and reduction in the sound of a gunshot. They argued the former lessened battle fatigue and the latter made communication on the firing line easier.

Although the Army shed its cache of Maxim and Moore suppressors after World War I, in the 1940s it moved to obtain 1,000 M3 Grease guns equipped with mufflers produced by Bell Laboratories in addition to suppressed Hi-Standard pistols used by OSS officers in World War II. Many of these guns remained in use through the Vietnam era where they were augmented by subsequent designs such as the Navy’s Mk22 Hushpuppy pistol and various SIONICS suppressors for the M14 and M16. The use of suppressed HK MP5s by special operations personnel in the 1980s and 90s is well documented.

Adam Mehlenbacher knows firsthand about dealing with hearing loss and complications for many service members and their families. He’s an audiologist who heads up the American Academy of Audiology’s Government Relations committee and he is also an Army veteran who had deployed to Bosnia and Iraq.

“Hearing loss and tinnitus are the most common service related disabilities. They can have an enormous negative impact on communication ability and quality of life,” Mehlenbacher told Guns.com. He added that they’re both completely preventable.

“Everyone in the military is issued hearing protection and as an audiologist I will say you should always wear it,” he said. “Although, as a veteran I know there are times when service members just do not. Issuing weapons with suppressors is a great way to reduce noise exposure.”

Citing his battlefield experiences, Mehlenbacher said using silencers makes tactical sense as well. “Being deployed is noisy — there are vehicles with large diesel engines, generators, and aircraft. Sometimes, you even get to do what you are trained for and shoot things. It can be hard to communicate on military radios in many combat situations even with normal hearing,” he said, adding troops in “combat must be able to shoot, move and communicate.”

He argued the consequences of not using silencers when deployed could be hazardous as well as end a military career once back home since hearing loss could effect quality of life.

“A service member with a hearing loss may be forced to change their (Military Occupational Specialty) to something less desirable because they are no longer effective in their role or even result in being medically discharged from the military,” Mehlenbacher said.

Knox Williams, president of the American Suppressor Association, a lobbyist group that advocates for legislation to deregulate the noise reducing devices, also promotes the concept of silencers as safety devices.

“We send our warfighters overseas with earplugs that we know they’re not going to use, and act surprised when they return with hearing related injuries,” he said. “In reality, it should come as no surprise that tinnitus and noise-induced hearing loss are the VA’s top two disability claims, conservatively costing taxpayers over $2 billion dollars annually. Every year, that number grows.”

Williams said he understands that small arms fire isn’t the only injury inducing noise source on the battlefield, but it is by far the most frequently encountered when not wearing hearing protection.

“Suppressors are the only tool that will mitigate any such noise at the source, greatly reducing the risk for permanent injury, while simultaneously preserving our warfighters auditory situational awareness in an engagement,” he said.

For this reason, he feels that every firearm in the U.S. military’s arsenal should be suppressed. “We owe it to our warfighters to do everything that we can to make sure that they return home safely without any permanent injuries. In regards to hearing, we have failed them thus far,” he said.

“From a monetary standpoint, we have a fiduciary responsibility to our taxpayers to be good stewards of their money,” he said. “The initial cost to outfit our warfighters with suppressors will be far less that the long-term cost of treating their injuries for life. As Benjamin Franklin put it, ‘an ounce of prevention is worth a pound of cure.’”