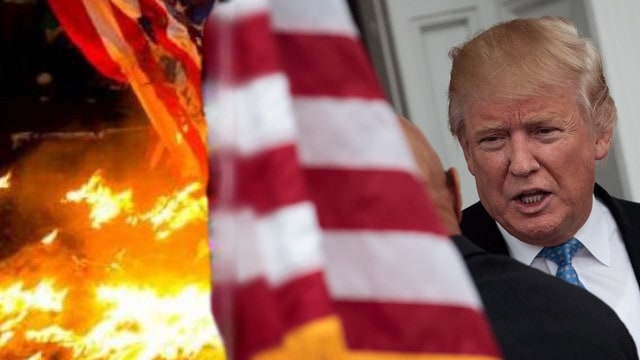 President-elect Donald Trump set off a firestorm this morning when he tweeted that “nobody should be allowed to burn the American flag.” Then he went a step further. “If they do, there must be consequences – perhaps loss of citizenship or year in jail!”

Nobody should be allowed to burn the American flag – if they do, there must be consequences – perhaps loss of citizenship or year in jail!

Burning the flag is protected free speech, and a 1989 Supreme Court decision solidified that. The late Justice Antonin Scalia voted with the majority in that case, and people on Twitter were sure to point that out to Trump.

Trump's "ideal" Supreme Court Justice Scalia in 2012 on CNN discussed how flag burning was "a form of expression" protected by 1st Amendment pic.twitter.com/58orl41c4G

Scalia said his ruling was rooted in a “textual” reading of the Constitution, but he didn’t shy away from his true feelings.

“If it were up to me, I would put in jail every sandal-wearing, scruffy-bearded weirdo who burns the American flag,” Scalia said in 2015. “But I am not king.”

In 1958, the Supreme Court ruled that stripping U.S. citizenship as a form of punishment violated the Eighth Amendment’s protections against “cruel and unusual punishment.”

In 2005, then-Senator Hillary Clinton co-sponsored a bill that would have brought back a flag burning ban. The bill wasn’t successful.

On Twitter, the response to Trump was swift. Republican Rep. Justin Amash weighed in, saying “no president is allowed to burn the First Amendment.”

Nobody should burn the American flag, but our Constitution secures our right to do so. No president is allowed to burn the First Amendment. https://t.co/nVkq6WcbHV

Actor George Takei referenced his loyalty to the flag in trying times.

I pledged allegiance to the flag every morning inside an internment camp. I would never burn one, but I'd die to protect the right to do so. https://t.co/O5ecSQkyC2

And CNN correspondent Phil Mattingly tweeted out a response from Senate Majority Leader Mitch McConnell on the issue.

Mitch McConnell on flag burning: "People like that pose little harm to our country. But tinkering with our First Amendment might."

On CNN Tuesday, Trump spokesman Jason Miller defended Trump’s position on the issue. “Flag burning is completely ridiculous and I think you know that and I think the vast majority of Americans would agree,” he said, adding, “flag burning should be illegal, it’s completely despicable.”