2 charged with murder after accomplice is killed during break-in 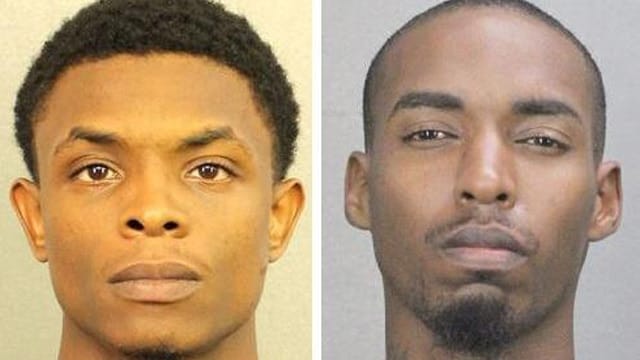 Jose Demond Coleman (left) and Curtis Jefferies are charged with murder after their accomplice was fatally shot during a break-in. (Photo: Broward Sheriff’s Office)

An attempted burglary at a home in Sunrise, Florida, Monday morning left one suspect dead and his two accomplices charged with murder, even though neither of them pulled the trigger.

The break-in occurred around 11 a.m. in what is described by local media as a quiet, middle-class neighborhood. After gaining entry into the home, the three suspects – Albert Eugene Jones, 21; Jose Demond Coleman, 23; and Curtis Jefferies, 26 – came face to face with the homeowner, 31-year-old Warren Darlow.

Darlow was armed with a gun and at some point during the confrontation, opened fire on the suspects, striking Jones. Coleman and Jefferies then fled from the scene, leaving their wounded comrade behind.

Jones was transported to the hospital, where he later died as a result of his injures. The homeowner was not injured.

Coleman and Jefferies were apprehended a short time after the break-in. One was found during a traffic stop, while the other was found running on foot a short distance from where the break-in occurred.

Both suspects are facing numerous charges, including murder. As with some other states, Florida allows murder charges to be filed against a suspect when an accomplice dies during the commission of a felony.

Coleman and Jefferies are being held without bond at the Broward County Jail and during a court appearance Tuesday, Broward County Judge Michael Davis gave them both a stern warning.

“There is a co-defendant in this case who is dead. You’re young men … you don’t want to wind up dead,” Davis said. “I want you to think very, very carefully about your lives from this point forward.”

Officer Chris Piper, spokesman for the Sunrise Police Department, confirmed that no charges have been filed against Darlow, but the decision will ultimately fall on the State Attorney’s Office.

Darlow was home alone during the break-in, and attempts by local media to contact him have been unsuccessful.