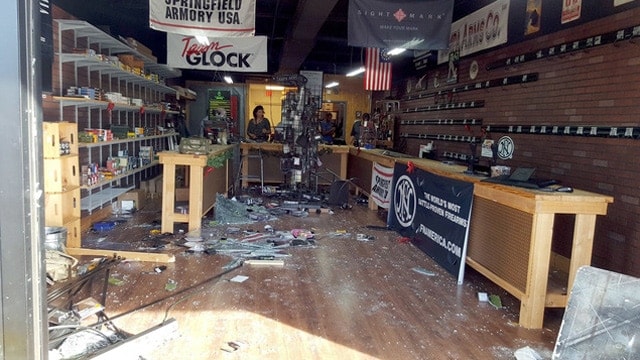 Shop owner Richard Smith said he was contacted a couple of hours after the burglary and was told the shop was “cleaned out.” (Photo: Fox 13)

Authorities are asking for the public’s help in locating at least a dozen suspects who are responsible for a smash and grab at a Tampa gun shop early Tuesday morning.

The National Shooting Sports Foundation has teamed up with the Bureau of Alcohol, Tobacco, Firearms and Explosives to collectively offer a $10,000 reward for information leading to the arrest and conviction of the suspects, the ATF announced in a news release Tuesday.

The suspects used a truck to smash through the front of Tampa Arms Co., then collected nearly 40 firearms from the shop. The Hillsborough County Sheriff’s Office was alerted to the burglary just before 3 a.m., and surveillance cameras captured the entire crime on video, which was completed in under a minute.

“It’s very unsettling because we go above and beyond here to make sure that all the guns are in responsible hands,” Smith said. “One gun on the street that’s not supposed to be there is just too much, so we feel bad about that. That’s our main concern.”

Smith said they have state of the art security, including cameras and alarm systems, but bars on the windows aren’t enough to enough to stop a 6,000-pound truck.

“Anytime that you have any firearms on the street, whether it’s one, five, 30 or 50, it is critical to get the firearms off the street,” said ATF spokesperson Mary Harmon Salter.

The news release said the ATF and their law enforcement partners are committed to the safety of the community and holding those who violate federal laws accountable. Additionally, the news release noted that the ATF and members of the firearms industry work together closely to “curb the criminal acquisition and misuse of firearms.”