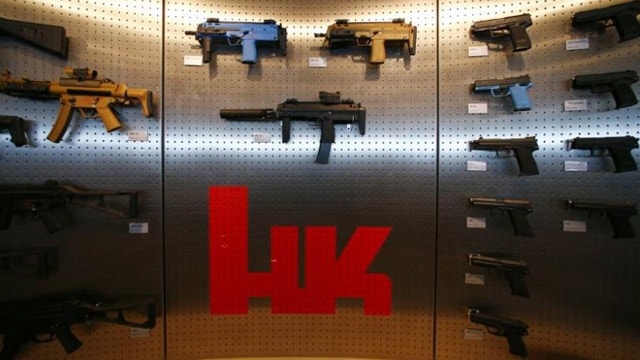 Heckler & Koch weapons are pictured at a show room at the headquarters in Oberndorf, 80 kilometers southwest of Stuttgart, Germany, May 8, 2015. Picture taken May 8, 2015. (Photo: Reuters/Ralph Orlowski)

Heckler & Koch, a German arms manufacturer that’s gotten caught up in some unscrupulous deals, will stop signing contracts that supply guns to countries outside NATO’s sphere of influence, the news agency DPA reported this week.

“We only want to deliver to solid countries – that means unequivocally democratic, definitely not corrupt, and in NATO or close to NATO,” a source told the news outlet.

The source, who was identified as a “manager” in the company, said Germany’s stricter arms export policies played a role in the shift, as did negative press. “We can certainly understand the ethical criticism of such exports,” he said.

Jürgen Grässlin, an anti-arms export activist in Germany, who has sued HK, called the shift surprising, saying it “contradicted the uninhibited business policy of direct exports and license grants practiced for decades,” according to Germany’s public broadcasting service Deutsche Welle.

Heckler & Koch’s HK416 rifle was reportedly used by a U.S. Navy SEAL to kill Osama bin Laden and its G36 is used by armies all over the world.

The company has been making guns for 67 years, and has sold guns to Iran, Sudan, Chad and Mexico. At least 15 countries have obtained licenses that allow them to manufacture the G36 rifle in their own factories, and the guns are often used in the Middle East and North Africa.

From 2003 to 2011, thousands of G36’s were sold to Mexico in a deal that violated Germany’s ban on weapons sales to conflict zones. Some former HK managers will go to trial early next year over that transaction.

The source said the shift in international strategy is still being “heatedly debated” within the company, and critics maintain that an anonymous pledge to the media isn’t akin to an official pledge to reverse course.