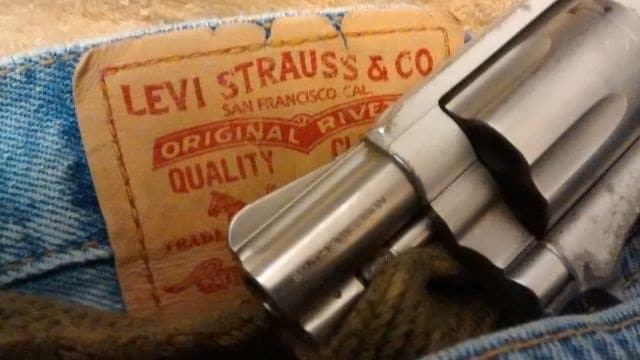 Levi’s asks that responsible gun owners please not carry in their stores or offices, even if allowed by law. (Photo: Chris Eger/Guns.com)

Bergh advised there had recently been an inadvertent discharge of a firearm in a store, injuring the customer who was carrying the gun, but then went on to paint a darker picture of the world.

Noting the company had stores in Paris, Nice, Orlando and its European headquarters in Brussels– all scenes of terror attacks in the past several months– and acknowledging, “the heartfelt and strongly-held opinions on both sides of the gun debate,” Bergh asked that, for safety reasons, “we respectfully ask people not to bring firearms into our stores, offices or facilities, even in states where it’s permitted by law. Of course, authorized members of law enforcement are an exception.”

He stressed the policy was a request and not a mandate that would be actively enforced, instead just asking that responsible gun owners respect his feelings.

“It boils down to this: you shouldn’t have to be concerned about your safety while shopping for clothes or trying on a pair of jeans,” wrote Bergh.

Fortune, in their coverage of Bergh’s letter, noted the 59-year-old vegan and former U.S. Army captain is not a gun owner, and that he consulted with Starbucks, who made a similar toothless request in 2013, when crafting his message.

“Levi’s invented blue jeans – and today they are not only reinventing what it means to wear jeans but also what it means to keep customers and employees safe in their stores, offices or facilities,” said Shannon Watts, founder of Moms Demand Action, in an email sent to Guns.com. “This is common sense: No one should have to worry about their safety when shopping for jeans.”