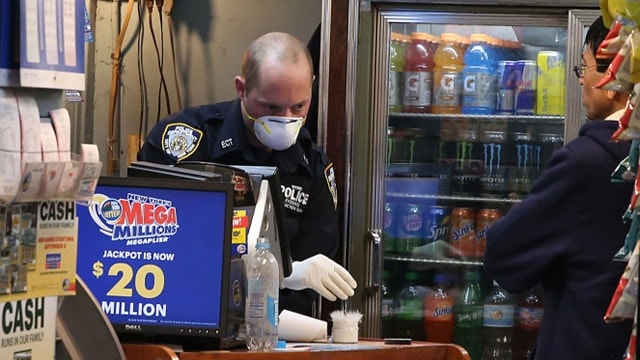 The not-so-smart suspect left behind a bottle of Smart Water, which police collected and kept for evidence. (Photo: Brigitte Stelzer / New York Post)

Authorities are after the man who robbed a small newsstand at Penn Station Friday morning after becoming enraged over purchasing losing lottery tickets.

Francis Macwan, 62, who owns the newsstand, said the guy is a regular customer and came in around 10:30 a.m., purchased about $200 worth of scratch-off tickets and became increasingly angry as he scratched them off one by one.

Macwan said the man won a fews dollars here and there, but nothing significant.

“Then he lost everything and got frustrated,” Macwan recalled.

“As he scratched the ticket, he didn’t say anything really, his face was mad and angry,” Macwan said.

And then things turned violent.

“He asked me what is the number of [one] ticket, so I checked, then he just pushed me, and I fell down. I fell on my chest on the floor,” Macwan said. “He took the money from the register, about $1,500.”

Macwan said he’s worked at the newsstand for more than two decades and has only been robbed one other time, about 10 years ago. But Macwan also said Friday’s fiasco cost him more than the previous robbery.

Authorities collected a surveillance video as well as a bottle of water left behind by the suspect.