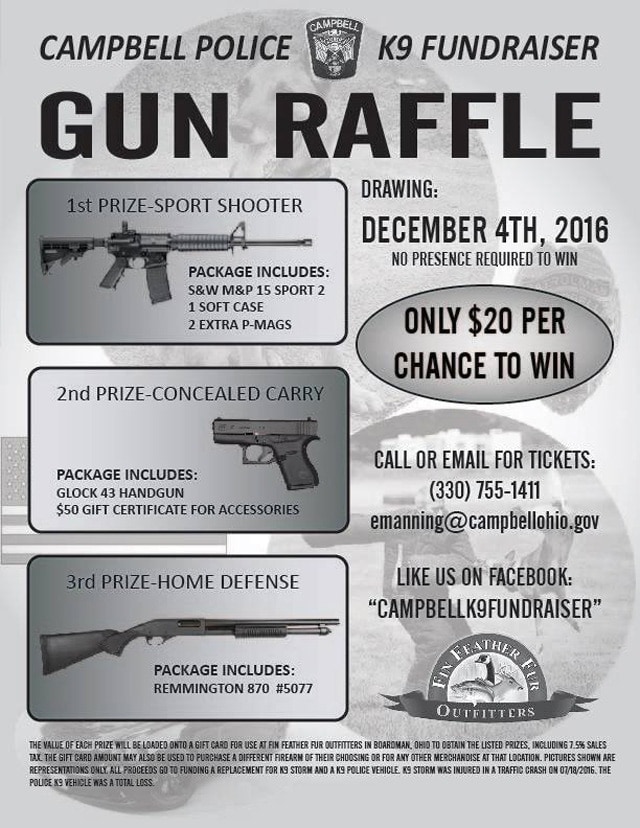 The Campbell Police Department is hosting a gun raffle to raise $15,000 for a new police dog, but after receiving some criticism about the raffle, the department decided to clear up a few misconceptions.

First, Officer Eric Manning explained that the department isn’t actually giving away a gun, as noted in the fine print on the flyer. Instead, the department will be giving away gift cards for a sporting goods store where a gun – or other sporting equipment – may be purchased. So no, the police department isn’t handing out “assault rifles” to random people whose names are pulled from a hat, despite implications of such from scoffers on the department’s Facebook page.

Manning explained that this gives people who may not be able to purchase a gun – but still want to support the program – a chance to participate. Manning said the gift card can be used for anything in the store, but, of course, for those who want to purchase a firearm, they must still undergo – and pass – a background check and abide by all gun laws already in place.

“At the Campbell Police Department, we believe in the Second Amendment,” Manning previously said. “We believe in people’s right to bear arms. We believe in law-abiding citizens’ right to own guns. We also believe in Ohio’s concealed carry laws.”

Manning said the majority of the feedback the department has received about the raffle has been positive.

“Really, the main negatives that we’ve gotten about this have been mostly out of state. There [has been a] specific anti-gun activist group that posted for all its members to boycott, harass and generally make our lives miserable or attempt to,” Manning said.

In addition to the raffle, the department is also selling T-shirts and other items with the Campbell Police Department insignia to raise the needed funds.