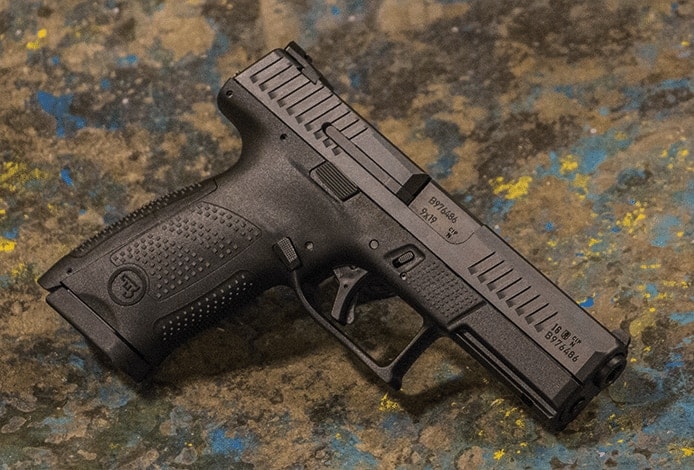 CZ’s P-10C just cleared the ATF and is expected to start shipping to retailers in early 2017. (Photo: CZ-USA)

CZ takes a stab at the striker-fire concealed carry market with the introduction of its latest pistol, the P10C, quietly announced late last week on the Czech-based company’s website.

Though the firearms maker hasn’t released all the official details on the new handgun, CZ did leak a few goodies to wet appetites.

Chambered in 9mm, the P-10C is built on a fiber-reinforced polymer frame with a nitride finish for durability. Aggressive stippling on the grip paired with a deep beavertail and three interchangeable backstraps aim to give shooters better grip on the gun for more accurate shooting.

Knowing that soft, spongy triggers are a common complaint among striker-fired fans, CZ said engineers took  extra care in designing a trigger that would please shooters straight out of the box.

So many striker-fired pistols do many things right, falling short when it comes time to pull the trigger,” the company said. “Designed to minimize creep and stacking, the P-10’s trigger breaks at a clean 4-4.5 pounds and rebounds with a short, positive reset, meaning single shots can be meticulously placed while follow-ups are effortless.”

The P-10C boasts 15+1 capacity with a flush magazine while an extended magazine bumps that up to 17+1. In addition, P-10C magazines are designed to fit P-07 model guns, though P-07 magazines will not work in the P-10C — yet. The company does have plans to overhaul P-07 magazines so that eventually the two styles will work seamlessly between both the P-10 and  P-07. In addition to some mag swapping, CZ has also configured the P-10C to fit P-07 holsters.

The pistol has just been cleared by the Bureau of Alcohol, Tobacco, Firearms and Explosives for import and the company is expecting to begin shipping in early 2017. The P-10C will retail around the $500 mark, making it an affordable option for the striker-fired crowd.