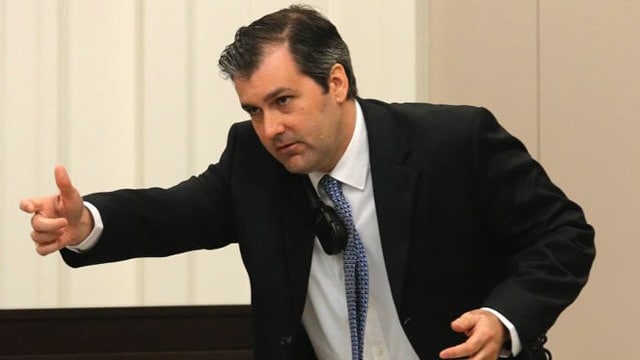 As jurors visited the scene Wednesday where a former South Carolina officer shot and killed an unarmed motorist, the judge in the case decided he’ll let the jury consider a lesser charge of manslaughter.

Michael Slager, 35, has been charged with murder for the shooting death of Walter Scott during a traffic stop last spring, an incident that was captured on video. The murder charge puts the burden on the prosecution to prove Slager acted with malice when he shot the unarmed black man in the back several times. The judge approved the prosecution’s request Wednesday to allow the jury to also consider a manslaughter charge, which doesn’t require proof of malice.

The jury, 11 white people and one black man, has heard 55 witnesses in the monthlong trial, with Slager taking the stand Tuesday. He said he felt “total fear” and his “mind was like spaghetti” after running and fighting with Scott on the ground.

“I fired my firearm until the threat was stopped,” said Slager, who was dismissed from the North Charleston Police Department after the shooting.

Earlier this month, during opening statements, prosecutor Scarlett Wilson said Slager’s “first instinct after he cuffed the dead Walter Scott was to stage the scene.”

But on the witness stand Tuesday, Slager said he wasn’t trying to plant evidence when he walked back to where they struggled, picked up a taser, and dropped it by Scott’s body, a moment captured in the video.

In closing arguments Wednesday afternoon, the defense said the media created a false narrative around the shooting. The prosecution claimed there was a lot of “smoke and mirrors” and told jurors “you can get this right.”

Slager will also face a federal trial that’s scheduled for next year.