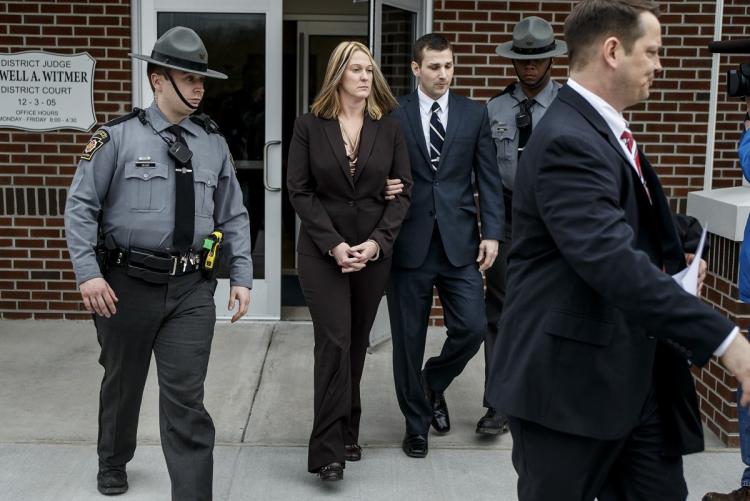 Police Officer Lisa J. Mearkle being escorted from court after being charged with criminal homicide in the shooting death of motorist David Kassick in February 2015 in Hummelstown, Pennsylvania, about 105 miles west of Philadelphia (Photo: Dan Gleiter/AP)

A group of Pennsylvania prosecutors recommended Tuesday officials should not publicly identify officers involved in the fatal use of force unless charges are filed against them.

The Pennsylvania District Attorneys Association offered the advice during a press conference with reporters discussing the group’s 16 recommendations for investigating and prosecuting officer-involved shootings.

The statewide guidelines — a first of its kind in the nation, the association’s Best Practices Committee said — encourages independent investigations of any police-involved shooting to reassure public confidence and promote transparency.

“Officer-involved shootings are traumatic, complex, and highly publicized events,” said David Arnold, PDAA president and district attorney for Lebanon County, about 90 miles west of Philadelphia. “As prosecutors, it is our duty to ensure that any police-related shooting is thoroughly reviewed in a manner that is objective and fair for everyone involved.”

Arnold said their goals are to help officers make better decisions under difficult circumstances and help the public better understand and have greater confidence in the process.

Chester County District Attorney Tom Hogan, who chaired the Best Practices Committee, said Tuesday responses to officer-involved shootings nationwide have been riddled with “wide disparities by prosecutors” — something the association wants to prevent on a state level.

Other recommendations include requiring the district attorney to direct investigations within their county and release a detailed report after the investigation is complete. Departments should also use “best-available technology,” including 3D mapping and video recordings, to make sense of what is often a “large and confusing” crime scene.

Not every one of the state’s 67 district attorneys, however, agrees on withholding officers’ names.

“It is a recommendation — it’s not binding,” said Allegheny County District Attorney Stephen A. Zappala Jr in an interview with the Pittsburgh Tribune Review. “I don’t see what reason that would not be something of interest to the public.”

Zappala said many of the association’s guidelines were implemented in the county in 2002 in a deal between his office and Pittsburgh Police.

“Obviously, it’s very bad public policy for an agency to investigate themselves,” he said.

“That’s the coroner’s practice, which I certainly approve of,” he said, according to the newspaper. “It does provide transparency.”

The recommendations come one week after Pennsylvania Gov. Tom Wolf vetoed a bill shielding law enforcement from public identification for 30 days or until investigation into any police-involved shooting is complete.

“These situations in particular – when law enforcement uses deadly force – demand utmost transparency, otherwise a harmful mistrust will grow between police officers and the communities they protect and serve,” he said in his Nov. 22 veto message.

Rep. Martina White, R-Philadelphia, vowed to reintroduce the widely-supported bill in January, when the state Legislature’s Republican majorities will climb to historic highs.

“Shootings are increasingly political,” she said. “That places the lives of our officers and the lives of their family members in danger. While we need transparency whenever police are involved in a shooting, we owe our officers basic protection from threats.”