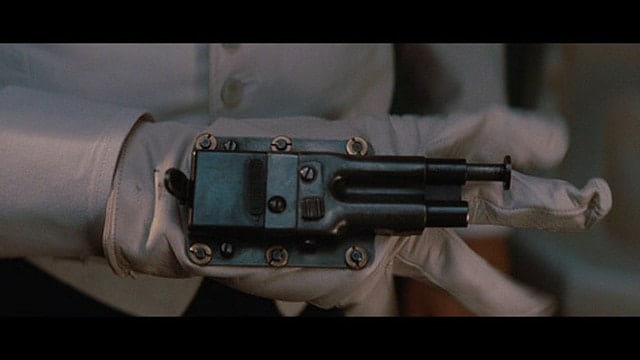 “Because of their unusual nature, these guns are thought to have a place in the world of espionage and subterfuge, when in reality, the patent holder, a Mr. Haight…had the common soldier in mind,” said Rock Island Auction expert Joel Kolander in the video above.

U.S. Navy Capt. Stanley M. Haight developed the glove gun as a response to Japanese ambushes against U.S. Naval Construction Battalions during World War II. Haight filed a patent application for the design in 1944 and the Sedgley Company produced it.

“Haight designed a weapon that could be ready and at hand at all waking hours, so even if a soldier was caught unaware or while separated from his regular service weapon, he could simply ball up his fist and make a good, loud response,” reads the glove gun’s description on the Rock Island Auction page. “Additionally, the original patent points out that any concealability was secondary to speed of deployment and actively sought to distinguish the pistol from sneak guns like the Juhasz sleeve pistol or the Woods watch gun.” The gun’s design is unique. A spring loaded plunger runs parallel to, and is slightly longer than, the single shot 2 7/8 inch smoothbore barrel – all of it affixed to the back of a white leather work glove. To fire the weapon, you make a fist and punch your would-be attacker, depressing the plunger and firing a single .38 caliber round.

Or, as Joel Kolander puts it in the above video, “punch, bang…one dead opponent.” 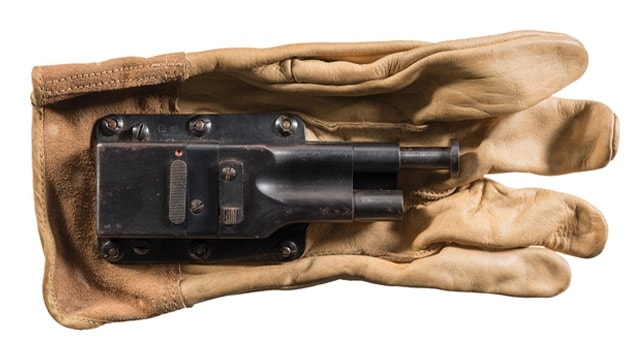 A photo of the glove gun that’s being auctioned off this weekend at Rock Island Auction Company. (Photo: rockislandauction.com)

There isn’t a lot of information about how the gun was used by the U.S. military. It’s estimated that Sedgley only made 52 glove guns, including prototypes. The U.S. Navy’s official designation of the weapon was the “Hand Firing Mechanism-MK-2.”

The glove gun is being auctioned off as part of Rock Island’s 2016 December Premiere Auction from December 2-4. They estimate the gun’s value at somewhere between $5,000 and $7,500.