Gun that wounded famous French poet in 1873 auctioned for $460K 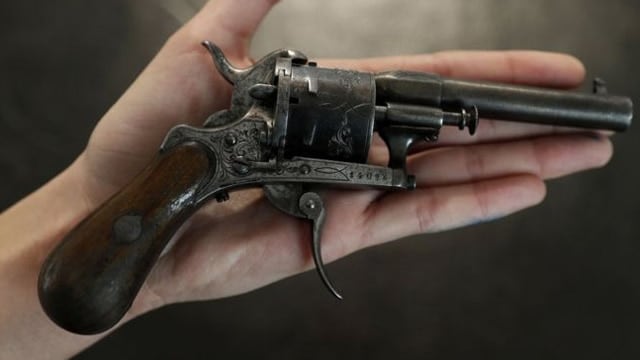 A revolver used during a lover’s quarrel between two French poets before the turn of the nineteenth century fetched a whopping €434,500, or $460,000, at an auction in Paris, more than seven times what auctioneers originally estimated.

French poet Arthur Rimbaud was shot in the wrist with the gun, while a second shot intended for him ricocheted off of a wall and struck a chimney inside a Brussels hotel on July 10, 1873. Rimbaud, who was just 18-years-old at the time, was reportedly arguing with his lover and fellow French poet, Paul Verlaine, who was married at the time, when Verlaine picked up the Lefaucheux six-shooter and said, “Here’s how I will teach you how to leave!”

Verlaine spent two years in prison for the fiasco, while the gun was returned to the Brussels gun shop where it was purchased. There the gun stayed until 1981 when the shop closed and the revolver was purchased by a collector.

Rimbaud, who is most famously known for the book Une Saison en Enfer, or A Season in Hell, traded firearms in Africa and died at the age of 37 in Marseille.