Indiana newspaper: Do we need permission to exercise a right? 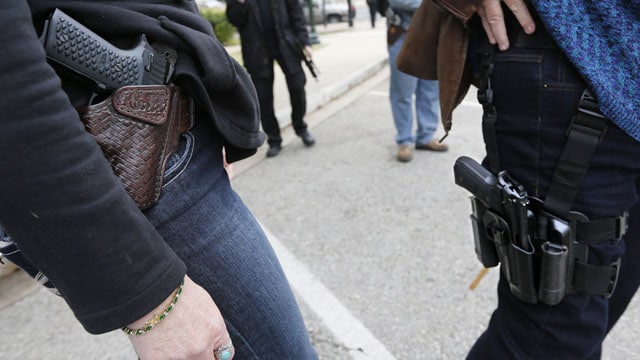 The editorial board at the News Sentinel wouldn’t take a hard position on the constitutional carry issue, but asked readers to ponder the pros and cons. (Photo: Erich Schlegel/Getty)

As an Indiana lawmaker pushes for constitutional carry in that state, the editorial board at the Fort Wayne-based News Sentinel is asking its readers this week to reflect on whether Hoosiers “need permission to exercise a right.”

Constitutional carry allows people to carry guns without a government permit, and 11 states have such a law on the books. In Indiana, Republican Rep. Jim Lucas is pushing for the measure, saying “it’s immoral and even it is criminal … to force an innocent person to jump through hoops and pay money to the state to prove their innocence and exercise a constitutional right.”

The editorial board at the News Sentinel isn’t sure what to think.

“We don’t think this a bright-line issue with all the right on one side or the other,” writes the editorial board. “There are all sorts of limits placed by governments of different levels on most of the rights we exercise.”

Still, in an effort to spark discussion, the board offered up counter arguments to enacting constitutional carry. A big one, they say, is that the permitting process allows law enforcement to keep track of who buys guns. Losing that process makes it difficult to keep guns out of the hands of people who shouldn’t have them, a concern echoed by some law enforcement officials in the state.

There’s also worries about public safety. The permitting process often allows gun owners to consider safe, responsible gun ownership. “That is no small thing in a state like Indiana that does not require any firearms training to get a permit,” writes the board.

“Can we give up that education or get it in some other way?” they ask. “That’s the question of the hour.”

Both chambers of the Indiana General Assembly have Republican super majorities, and onlookers think the bill could fly through the legislature when they start their work in January. It’ll be up to new Gov. Eric Holcomb, a Republican who ran on a pro-gun platform, to take it from there.