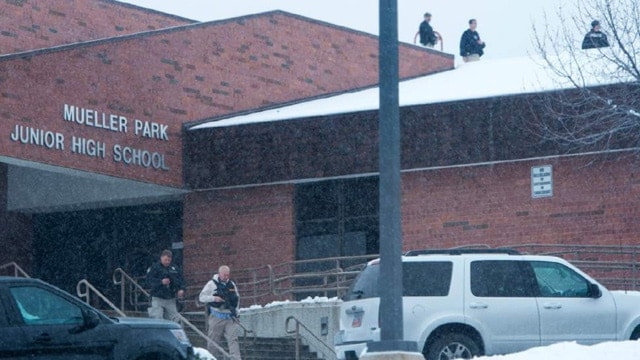 An officer arrived on the scene in less than a minute after the first 911 call came in. (Photo: The Salt Lake Tribune)

What could have ended in tragedy when a student brought two guns into a Utah school Thursday morning was averted thanks to the teen’s parents who realized something wasn’t quite right and acted on their instincts.

According to a press release from the Bountiful Police Department, just after 8 a.m., a 15-year-old boy, whose name was not released, entered Mueller Park Jr. High School in Bountiful, just north of Salt Lake City. The teen was wearing a long black trench coat and carrying two guns – a 9mm handgun and a 12-gauge shotgun – and walked into a classroom, which was occupied by 26 students and a teacher at the time, and fired a single shot into the ceiling, leaving a hole the size of a small plate. Witnesses said the teen briefly pointed the gun at himself but never pointed it at any of the students or staff.

Immediately after the shot was fired, a 911 call came into the Bountiful Police Department and an officer was on the scene in under a minute. However, before the officer arrived at the school, the teen’s parents had already entered the school and disarmed their son.

Authorities later learned that the parents observed the boy was behaving in what they described as an odd manner before school. Once the teen left for school, however, the parents realized that the two guns were missing from their home. Upon discovering this, the parents immediately went to the school to find their son.

As the parents entered the facility, they heard the gunshot and ran to the classroom where their son was located. A brief struggle ensued between the teen and his parents, but the parents were able to disarm the boy.

The first responding officer on the scene took the teen into police custody and recovered the two weapons for evidence. The teen was booked in the Farmington Bay Juvenile Detention Center where he faces multiple charges.

“It was scary,” 15-year-old Calvin Smith, who was in the classroom where the shooting occurred, told The Salt Lake Tribune. ”It was terrifying.”

Smith said the suspect walked through the door and stood motionless and angrily for a moment, while a fellow student said, “You don’t want to do this.”

Smith said in a matter of seconds student “hit the floor” and the suspect’s parents came in and disarmed him. According to Smith’s account, the father tackled the boy to the ground while the mother took the guns away.

Afterward, Smith said all of the girls in the classroom started to cry, but he also admitted that he wanted to cry as well.

Fortunately, no one was injured. Authorities have not yet released a possible motive or detailed the teen’s intentions.