Gun groups say no to Petraeus for Secretary of State 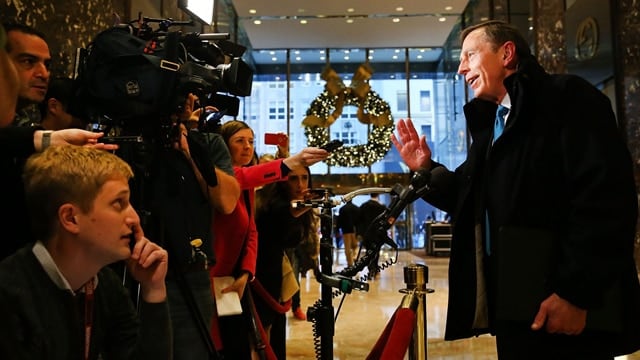 As President-elect Donald Trump continues to build his cabinet, gun groups are coming out hard against his potential Secretary of State pick David Petraeus.

“Having a Secretary of State who openly advocates for more gun control, and who has the ability to reinterpret regulations without Congressional oversight, would be disastrous for gun owners, hobbyist gunsmiths, and manufacturers,” reads a petition posted by the Firearms Policy Coalition on their website.

Petraeus, a retired general and former CIA director, is part of an advisory committee for the Veterans Coalition for Common Sense, a group that works to “urge elected leaders to do more to prevent gun tragedies.” The group was co-founded by retired astronaut Mark Kelly, the husband of former Rep. Gabrielle Giffords.

But gun groups are most up in arms over Petraeus. “As Secretary of State, Petraeus would play a key role in deciding whether to remove the U.S. from the UN Arms Trade Treaty,” reads a post from the Gun Owners of America. “This agreement would mandate gun registration, and would authorize comprehensive gun bans — all goals supported by Petraeus’ colleagues Kelly and Giffords.”

The irony of a Petraeus pick is a talking point for gun groups, and anyone watching. Trump slammed Hillary Clinton on the campaign trail for her handling of classified information, something she wasn’t charged for.

But Petraeus was charged for mishandling classified info. He pleaded guilty last year to a misdemeanor charge, admitting that he gave his biographer and lover, Paula Broadwell, sensitive information.

“The system is rigged,” Trump tweeted when the FBI recommended Clinton not be charged. “General Petraeus got in trouble for far less. Very very unfair! As usual, bad judgment.”

And now it’s Trump’s judgment that Second Amendment supporters are questioning, after an election cycle that saw their broad support for him.

“President-Elect Trump and U.S. Senators, DO NOT pick and confirm General Petraeus as Secretary of State,” reads the Firearms Policy Coalition petition. “We need to uphold our Second Amendment rights and the General has proven that he will not do that!”

A previous version of this post incorrectly labeled Gabrielle Giffords as a former U.S. senator. In fact, Giffords served in the United States House of Representatives.