Rare North Korean 'Type 73' lives on in conflict zones, thanks to Iran 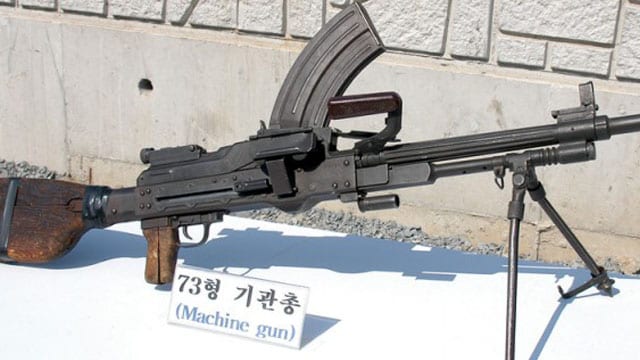 The North Korean Type 73 machine gun is making the rounds in conflict zones, and Iran might be behind its proliferation. (Photo: sadedefensejournal.com)

A rare North Korean machine gun was found in a small ship smuggling firearms across the Arabian Sea earlier this year, and according to a report released last month, Iran may be the reason they’re showing up in conflict zones.

The North Korean Type 73 machine gun is virtually unheard of outside North Korea, according to the National Interest magazine. But Australian and French soldiers found a bunch of them on a ship that was likely headed to militants in Somalia and Yemen.

A group that monitors such transactions, Conflict Armament Research, says the shipments could have a link to Iran and groups Iran supports. “Furthermore, the presence of materiel in Yemen with matching lot numbers and displaying the same serial number sequence … supports the assertion that materiel on board the (ships) was ultimately destined for Yemen, and likewise, that the materiel recovered in Yemen probably originated in Iran,” reads the report.

The Type 73 has become less elusive, as it has turned up on battlefields in Yemen and Iraq. Still, little information has come directly from North Korean sources about the weapon. Experts say the design was adapted from Soviet and Warsaw Pact designs. The 23-pound gun mixes the design of the Russian PKM with the feeding system of the Czechoslovakian Vz.52.

The magazine sticks out from the top of the gun, and it has a special attachment that allows soldiers to fire rifle grenades.

North Korea gave up on the gun in the early 1980’s when it developed the Type 82, a gun that looks much more like a standard PKM, according to the National Interest.

“It seems that many Type 73s were moved to reserve or militia service, but nobody can be sure,” wrote Dan Shea and Heebum Hong in Small Arms Defense Journal in 2013. “There’s only one sample each of Type 73 and Type 82 known to the public: a Type 73 is in South Korean Army custody, and a Type 82 is possessed by the Japanese Coast Guard – they recovered one from a North Korean spy ship they sunk in 2002”

In the 1980’s, when Iraq invaded Iran, the Iranians bought a bunch of Type 73’s from North Korea. Then Iran started to build their own Type 73’s. Now, nearly 20 years later, the guns are popping up all over the place.

In 2015, pictures surfaced of Shia fighters with the guns in Iraq. And by 2016, the guns made their way to Syria and Yemen. The fighters seen using them in recent years haven’t been using the large magazines. The Type 73 uses the same cartridges and ammunition belts as the PKM, and modern militants seem to prefer that choice.

With originals, copycats, and the burgeoning underground gun trade amongst these fighters in the Middle East and East Africa, the Type 73 is likely to live on, even as its place of origin long since abandoned it.