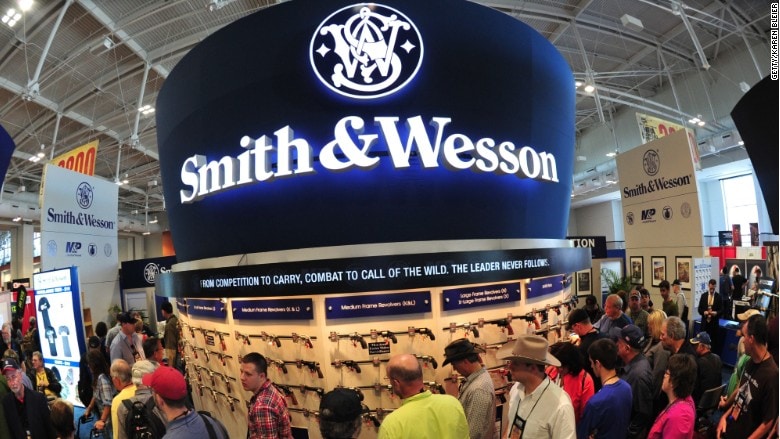 Smith & Wesson stocks plummeted, dipping a dramatic 12 percent at the close of Friday, after the company unveiled plans to shift its focus towards the rugged, outdoor and accessories market.

The Massachusetts-based manufacturer has no intentions of abandoning its profitable firearms division, but President and CEO James Debney told investors the future lies outside of just handguns and rifles.

“Our strength in firearms has not only delivered growth but it has served as a strong core business and a solid foundation from which we are pursuing a broader and exciting strategy — and that is our focus on the growing market for shooting, hunting and the rugged outdoor enthusiasts,” said Debney. “This large and growing market is populated by active lifestyle consumers who pursue their activities with passion and who exercise brand loyalty, seeking out brands they can trust.”

Firearms, and primarily handguns, have long been the company’s top earner. Smith & Wesson reported $233.5 million in net sales in its second quarter with $185 million of that coming from its firearms division. In comparison the newly added outdoor and accessories division pulled in just $39 million.

The shift towards the outdoor consumer market began two years ago when Smith & Wesson acquired Battenfeld Technologies. Since then the company has added both Taylor Brands and Crimson Trace to its lineup under a newly created outdoor and accessories umbrella.

Debney said the company isn’t anticipating immediate returns, but with enough time and attention the division could see significant growth.

“I would anticipate over time, a long time for sure, that we should be able to significantly grow inorganically in that rugged outdoor space versus firearms where the market is much smaller and we already have significant market share when it comes to handguns and modern sporting rifles, in particular,” he said during the meeting.

The outdoor and accessories division is already seeing some profit this year. The division reported an increase of $19.3 million in revenue during the second quarter, according to financial documents filed with the Security Exchange Commission Thursday.

Though revenue seems to be on an upward trend, investors seemed unsure of where the growth would top out at; repeatedly asking Debney and Smith & Wesson Chief Financial Officer Jeffrey Buchanan for clarification on how the acquisitions are expected to perform in the future.

“Taken together (the rugged outdoor market) provide us with a much larger addressable market, one that we believe exceeds $60 billion-plus in size, and one with a user base that has much in common with our core firearm consumer — a rugged outdoor lifestyle and an affinity for strong and trusted brands,” Debney told investors. “We’ve only just begun our journey toward achieving our vision of being a leading provider of high quality products for the shooting, hunting and rugged outdoor enthusiasts.”

Smith & Wesson adjusted its anticipated overall earnings in the second quarter, increasing expectations to between $920 million and $930 million in earned revenue by the end of the fiscal year.