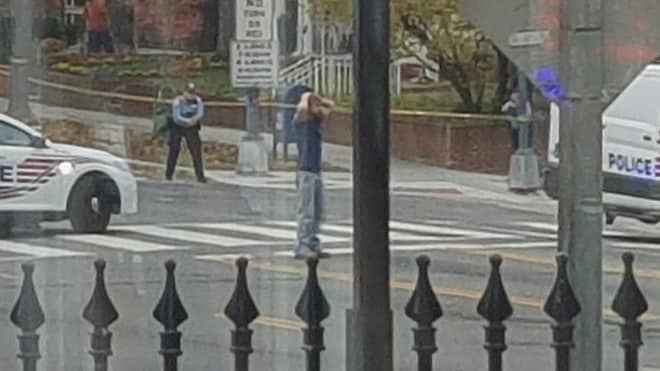 A fake news story spread by conspiracy theorists spurred an incident Sunday in which a gunman opened fire inside a pizzeria in Washington, D.C.

Officers arrested Edgar Maddison Welch, 28, of Salisbury, North Carolina, for assault with a dangerous weapon, according to a statement by the D.C. Metropolitan Police Department.

According at statement by authorities, Welch entered Comet Ping Pong and pointed a firearm at an employee, who quickly fled and called police. Welch then fired a round inside the restaurant. According to reports, Welch was equipped with an AR-15 rifle.

When officers arrived on scene they arrested Welch without incident. During their initial investigation, they recovered two more firearms inside his car. No one was injured.

According to a timeline of pizza gate published by the BBC, the conspiracy originated in early November when Comet’s owner and Democratic supporter, James Alefantis, was named in one of the many Clinton campaign emails shared by Wikileaks.

Internet trolls searched through Alefantis’s social media accounts and found innocent pictures of children and modern art that lines his restaurant walls, and dreamt up a pedophile sex ring, the BBC reports. The issue exacerbated when the narrative advanced in popular forums and later propagated by large international media outlets reported the story. Despite the momentum and outrage, the story was widely debunked.

The D.C. police said the shooting incident remains under investigation and asks anyone with information to contact them.