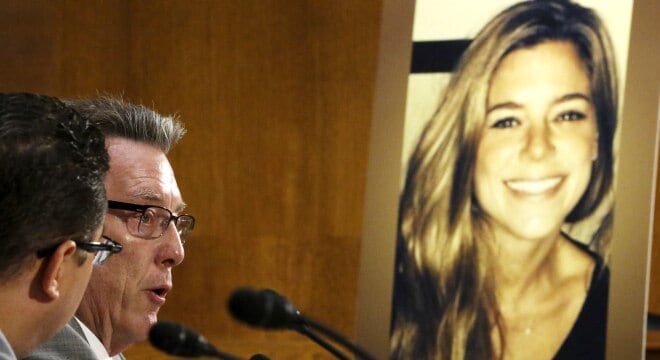 Kathryn Steinle’s father Jim Steinle, testifies about his daughter’s murder during a 2015 hearing of the Senate Judiciary Committee on immigration enforcement (Photo: Reuters)

The government asked a San Francisco federal court to dismiss a high profile wrongful death case brought by family of a woman killed by an illegal immigrant with a stolen federal officer’s service weapon.

The court heard arguments Friday as to whether the government shares blame for the death of Kate Steinle because a federal ranger left his pistol in a backpack that was stolen from inside his vehicle, according to reports.

The U.S. Attorney’s Office said a gun owner isn’t liable if their weapon is stolen and later used in a killing. They described the gun as being concealed in a backpack that was locked in a car and then used four days later in an unforeseen criminal act, so the ranger — and government by extension — could not be liable. They argued the theft and the shooting were two separate criminal acts.

But attorneys representing Steinle’s parents maintain the Bureau of Land Management, Immigration and Customs Enforcement, the City and County of San Francisco, and former Sheriff Ross Mirkarimi acted negligently by failing to secure the firearm and releasing the alleged killer, a known criminal alien, from police custody. They filed a $25 million lawsuit in May.

Steinle’s alleged killer, Juan Francisco Lopez-Sanchez, 46, a Mexican national who has at least seven felonies and five deportations under his belt, had been arrested by the San Francisco sheriff’s office before Steinle’s murder on July 1, 2015. Despite a request by ICE to further detain him, he was released due the directives of then-Sheriff Mirkarimi to generally refuse ICE requests. Lopez-Sanchez pleaded not guilty last year to the murder charge and maintains he found the gun in a T-shirt on a bench.

According to a motion for dismissal, the government confirmed the gun used in the killing was a BLM issued .40-caliber Sig Sauer P-239 pistol, but argued courts have generally rejected claims that hold a gun owner liable for crimes committed with a stolen firearm. However, the government responded to allegations of neglect saying ICE was under no obligation to keep Lopez-Sanchez in custody with its current resources, and the ranger did not violate official policy on weapon storage.

Steinle’s parent hold that negligence allowed their daughter’s alleged killer to be in the county despite his extensive criminal history and illegal status, then contributed directly to his being armed.

“Kate was killed by a weapon that her tax dollars paid for and by a man who should never have been present in the United States,” they said in response to the government’s motion to dismiss. “If the Bureau of Land Management had exercised ordinary care and properly secured a loaded lethal weapon according to departmental policy and government regulations, Kate would still be here.”