HK Operational Briefcase up for grabs in online auction 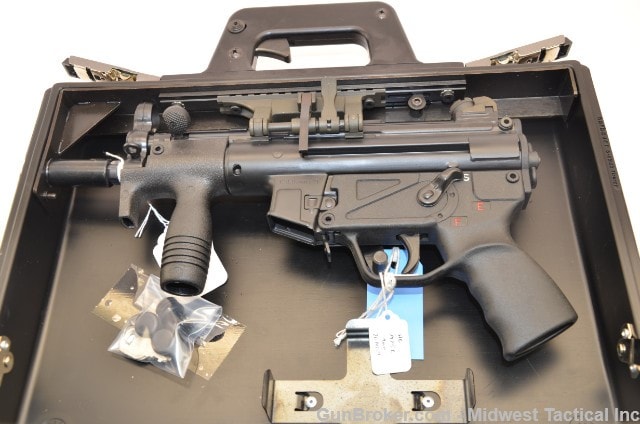 The HK Operational Briefcase is configured to accept either the MP5K or SP89. Guns are not included in the Gunbroker.com auction. (Photo: GunBroker)

Covert gun concealers fancying a little James Bond-like action can head over to online auction site Gunbroker to nab a piece of spy history in the way of the Heckler & Koch Operational Briefcase.

Fabricated out of hard polymer and aluminum, the case measures 20 by 15-by-15 inches. Though the particular briefcase up for grabs does not come with a firearm, this unique piece of gear is equipped with mounting brackets to immediately accept the HK MP5K or the SP89, according to the listing.

Shooters familiar with the MP5K know its the shortened version of the HK’s MP5. Weighing in at just 5.5 pounds and with an overall length of 12.8 inches long, the MP5K nestles inside the briefcase with ease. Boasting an integrated trigger into the briefcase handle, the MP5K inside the case can churn out rounds at 900 rpm — emptying a 15 to 30 round magazine in one to two seconds.

Its sister, the SP89, is the semi-automatic pistol variant of the MP5 designed for civilian sporting use.

Touting use by elite special forces around the globe, the HK Operational Briefcase gives operators a discreet means to carry. 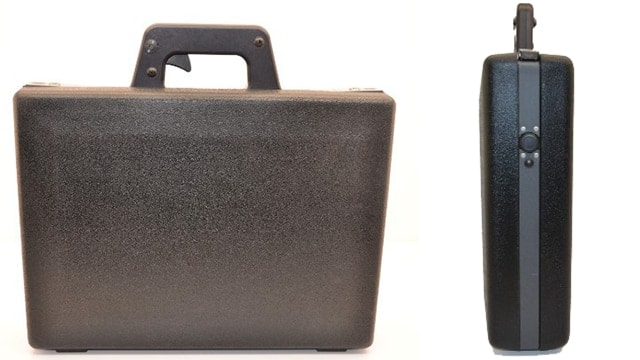 The hard polymer and aluminum fabrication keeps the firearm safe while allowing the gun to be fired from inside. (Photo: Gunbroker.com)

While carrying a briefcase gun will make owners feel like James Bond, the device’s practicality is up for debate. Off body nature of carry makes it susceptible for stealing in close quarters combat scenarios. The guns will be difficult to aim given that users cannot sight them properly due to encapsulation in the briefcase. Also, once the MP5K or SP89 have been emptied, the briefcase makes for awkward and time consuming reloads.

This particular briefcase auction does not require a tax stamp from the Bureau of Alcohol, Tobacco, Firearms and Explosives nor does it require FFL transfer since it does not actually come with a gun. Winning bidders that happen to already own a MP5K or SP89 should be aware that dropping either gun into the briefcase moves it into “Any Other Weapon” territory under the National Firearms Act and thus necessitates that ATF tax stamp. For further clarification on what is and is not accepted under the NFA, contacting a local ATF representative is recommended.

Bidders will have until Dec. 7 to nab this HK Operational Briefcase, courtesy of Midwest Tactical and Gunbroker.com. Current bid at the time of this writing was at $3,225.