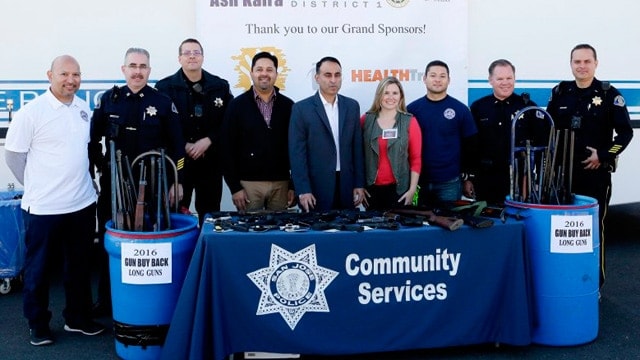 Officials were pleasantly surprised at the high turnout at the gun buyback. (Photo: The Mercury News)

Authorities in San Jose collected a total of 690 guns during a buyback event Saturday, surpassing a previous record of 450.

Individuals were encouraged to bring unwanted firearms to the event and – with no questions asked – were handed Target gift cards in exchange for the guns. Handguns, rifles, and shotguns were worth $100 gift cards, while AR-style rifles could yield a $200 gift card.

According to a tally by the San Jose Police Department, they received a total of 272 handguns, 410 long guns, and eight “assault” rifles. The first person in line at the buyback turned in 45 handguns, The Mercury News reported.

Just an hour and a half into the event, which lasted five hours, all of the gift cards they had on hand – $20,000 worth – had already been passed out. At that point, they instead started giving out cash in exchange for guns. The money for the buyback came from asset-forfeiture funds and donations collected by the San Jose Police Foundation.

Out of the firearms that were collected, those which are determined to have previously been stolen will be returned to their owners, while the remainder will be destroyed.

San Jose has seen an uptick in homicides this year, but Johnny Gogo, a prosecutor for the Santa Clara County District Attorney’s Office who has previously helped organize buyback events, admitted that it’s not easy to tie gun buybacks to a decrease in crime, but he is still hopeful of the impact.

“When you see the line of cars that we have and you see the number of people turning in their firearms, …you can’t help but think that that’s going to have an impact on these issues, from violence against our police officers to stolen firearms from residential burglaries,” Gogo said.

San Jose Police Chief Eddie Garcia echoed a similar sentiment in a post on Twitter, which was immediately met by a swarm of negativity.

“Over 500 guns so far. We can debate all you want, but that’s 500 guns NOT being stolen in burglaries,” the tweet read.

Likewise, Gogo concluded, “These gun buyback events do not solve our issues of gun violence, but it’s a small effort to try to help those issues.”