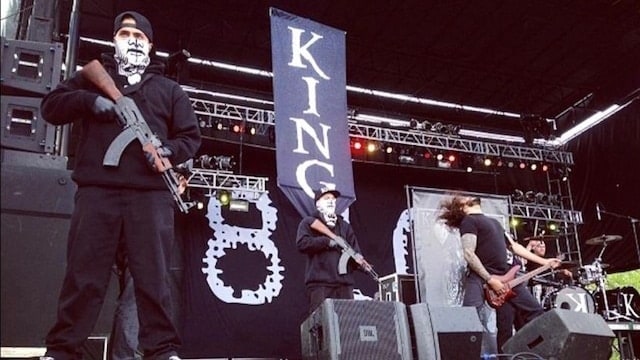 A music venue in Chicago cancelled an upcoming show with metal band King 810 after members of the community expressed concerns about “excessive use of guns and violent imagery” in the band’s act.

The Flint, Michigan-based band dresses in black and members wear masks and stand on stage holding automatic weapons, according to Fox News. Their 2014 debut album “Memoirs of a Murderer” includes tracks entitled “Killem All” and “Murder Murder Murder.”

A promoter for Thalia Hall, a music venue on Chicago’s Lower West Side, sent the band an email explaining the cancellation of the show scheduled for Dec. 18. King 810 frontman David Gunn posted the email on Facebook.

“We have been receiving phone calls from people in the neighborhood asking why the show is being allowed to happen,” reads the email. “We are ending 2016 with the highest rate of gun violence in Chicago’s history and people are particularly sensitive. Defending the show, in the current environment, is becoming more and more difficult.”

“The gun thing is part of the culture where we’re from, it’s inherently part of the band,” Gunn said in a video posted to the band’s Facebook page, adding that they’ve had shows cancelled before.

In an interview with Music and Riots Magazine earlier this year, Gunn said he’d been shot twice and has “more dead friends than the ones that are alive.”

“We’ve never used guns on anyone at shows. We’ve had hundreds of shows and they went off perfectly fine,” said Gunn in the video posted to Facebook. “Excessive use of guns, to me, is somethin’ like what happened to Dimebag,” he said, a reference to former Pantera guitar player “Dimebag” Darrell Abbott, who was shot and killed in Dec. 2004 by a fan during a show in Columbus, Ohio. The fan then shot into the crowd, killing three other people before an officer shot him dead.

Gunn also referenced the Nov. 2015 attacks at the Bataclan theatre in Paris, where three heavily armed terrorists shot and killed dozens of people during a concert.

“If anyone ever comes through the front door with an automatic rifle, they’re not going to be able to kill 150 people at a King show,” said Gunn in the Facebook video. “They’ll probably be shot from the stage.”

“So, the guns aren’t going away, and we don’t apologize for anything.”