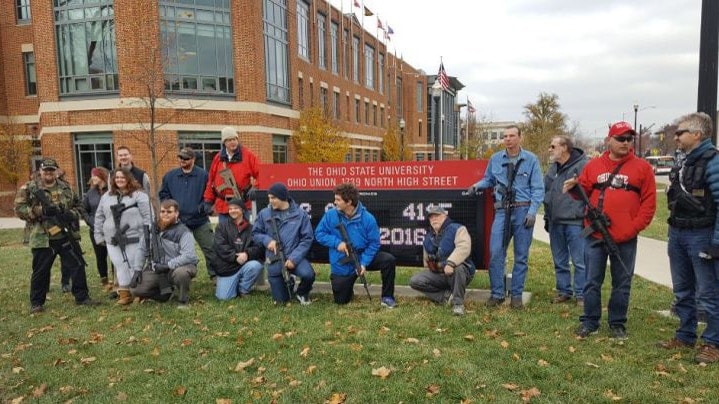 A group of concealed carry activists walked across the Ohio State University campus in Columbia Monday with guns in plain view, one week after a knife attack that injured 11 students.

Walk organizer Jeffry Smith, a Cincinnati-based firearms instructor, said the attack “was the canary in the coal mine” he hoped state legislators would finally hear.

“On top of the violent crime you have around college campuses, now we have this,” he said. “If you look at the states that give colleges the option to allow concealed carry, 99.9 percent refuse … it just further points out to me legislation giving universities the option is worthless.”

The proposal Smith is referring to — Ohio House Bill 48 — has gained renewed interest in the week since OSU student Abdul Razak Ali Artan drove his car into a group of people at the Columbus campus and then attacked others with a butcher knife.

House Bill 48, passed by the state House of Representatives last year, would allow licensed individuals to carry concealed weapons on campus, pending university approval. State senators could vote on the bill in the last weeks of the legislative session.

“None of them have done the scholastic work of looking at the states where the concealed carry on campus is legal to see if their concerns have come to fruition there,” he said. “They just want to bring up the same old tired reasons why it’s a bad idea, in the same way people brought up the reasons why concealed carry permits are a bad idea.”

Smith says it was “thanks to God” that Horujko happened on the scene when he did, hence why he dubbed Monday’s event — the seventh he’s organized in two years — the “no more sitting ducks” walk.

Smith says he began organizing university walks in 2014 after a decade of “no meaningful movement” from state lawmakers allowing license holders to bring concealed weapons on campus.

His first walk, at the University of Cincinnati in April 2014, welcomed participation from close to 70 concealed carry supporters, all of whom hoped they could foster open dialogue with students about the issue.

Smith says education remains the purpose of the walks — which is why he encourages participants to leave their “Don’t Tread on Me” flags and “three percent” shirts at home, hoping to maintain an image of approachability.

“My perception is, those kinds of things … make the group seem like a patriot group or a militia group,” he said. “They tend to segregate us from the people on campus. I want us to appear as everybody else, not to look special or different in some way. I mean, obviously the firearms make us stand out, but I want us to be approachable and some of those things in some people’s minds make us a look unapproachable.”

The tactic proved successful Monday, according to Smith, who estimated about 95 percent of the students who approached him and other walkers were “supportive or intrigued, but not scared.”

“The walk was beyond my wildest expectations,” he said. “It was absolutely off the charts.”