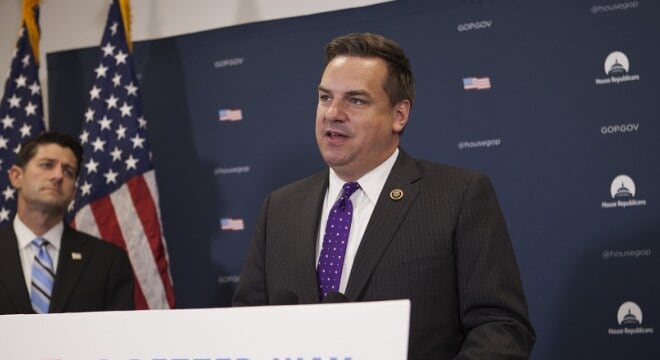 U.S. Rep. Richard Hudson, R-NC, has a bill queued up to allow current concealed permit holders to carry in any other state that issues permits (Photo: GOP.gov)

A Republican lawmaker and member of President-elect Trump’s Second Amendment Coalition has a concealed carry reciprocity measure waiting for introduction to the new Congress.

U.S. Rep. Richard Hudson, a Republican from North Carolina, is one of 121 co-sponsors of a languishing House bill to allow the holder of a valid permit to carry a concealed handgun in any state and announced Monday he planned to renew the effort as soon as the new body meets next year.

“Our Second Amendment right doesn’t disappear when we cross state lines, and I plan to re-introduce legislation in the first days of the 115th Congress to guarantee that,” Hudson said in a message posted to social media. Last month Hudson was one of just six Congressmen listed among the 62 co-chairs of the pro-gun Second Amendment Coalition of advisors to Trump.

Hudson’s plan would allow the holder of a valid photo ID and concealed handgun permit to carry in any state so long as they are not prohibited from possessing a firearm under federal law. Persons carrying as a non-resident in a state would otherwise be bound by whatever laws of the state they are visiting. This would end the confusing patchwork of reciprocity agreements that are currently in place across the country.

With the numbers of concealed carry permits ballooning in recent years and all states ostensibly having a framework to allow for such licensing, the prospect of treating concealed carry permits like driver’s licenses — allowing current permit holders to carry in any other state that issues permits — has been something of a holy grail for gun rights advocates.

Legislation has been steadily introduced by GOP lawmakers on Capitol Hill in the past three Congresses, but has failed to gain traction. Now, with a new administration in the White House, who has voiced support of the concept, nationwide reciprocity seems obtainable.

However, with only 52 Republicans in the new Senate and 60 votes needed to shortcut a filibuster, Connecticut Democrat Sen. Richard Blumenthal, a staunch gun rights opponent, told the Wall Street Journal last month that any version of a national reciprocity bill would be “dead on arrival” in the chamber.

Gun control advocates argue that any federal mandate to recognize carry permits would be a “race to the bottom” that could violate states’ rights by authorizing a visitor to carry a gun even if the permit holder didn’t meet the criteria to possess a firearm under the laws of the state they were visiting.