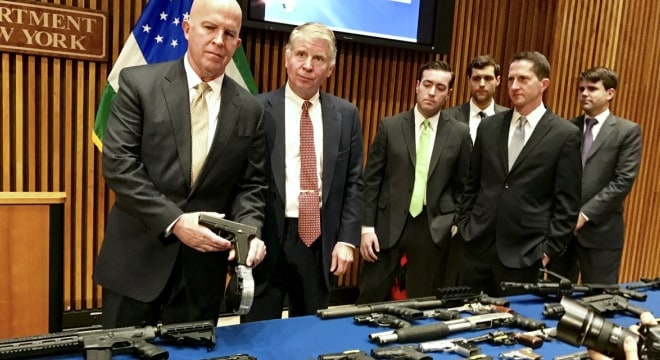 Manhattan District Attorney Cyrus Vance and officials from the New York Police Department this week announced the take down of the 23rd large gun trafficking ring in the city since 2010. (Photo: Manhattan DA)

Prosecutors and law enforcement in New York City on Monday advocated for tough new laws while announcing the indictment of four Virginia men allegedly involved in moving guns through the city.

The defendants, all from the Virginia Beach, Virginia area, were indicted on a litany of felonies involving the criminal possession and sale of firearms they allegedly purchased in their home state and brought to New York to sell for a profit, often garnering over $1,000 per gun. The alleged ringleader, Clive Dixon, 28, garnered over 150 charges while his accomplices Emmanuel Dentmond, 22; Antonio Williams, 27 and Teal Holt, 27, received fewer counts.

“These defendants are charged with driving up the Iron Pipeline to peddle deadly firearms in New York City on 15 separate occasions in just eight months,” said Manhattan District Attorney Cyrus Vance in a statement. “Virginia is the top source state for firearms trafficked into New York. As this indictment makes clear, our state’s otherwise-sensible gun laws do not meaningfully deter large-scale firearms traffickers from purchasing guns in states with weaker laws and selling them in New York.”

According to court documents, Dixon sold 86 firearms, including 65 pistols, 13 revolvers, five guns classified under New York law as “assault weapons” and three shotguns, to an undercover NYPD detective who was posing as a firearms dealer. The deals took place in both Manhattan and the Bronx near public housing and at least once at a Port Authority bus terminal.

Dentmond, Williams and Holt allegedly helped Dixon purchase the guns, sometimes in illegal straw buys, and helped him move them to New York between March 28 and Nov. 17.

Vance, who in 2014 joined with Los Angeles City Attorney Mike Feuer and a score of  big-city prosecutors to form the gun control group “Prosecutors Against Gun Violence,” has long blamed New York’s illegal guns on the “Iron Pipeline” coming from outside the state and has advocated tougher gun laws nationwide.

The prosecutor used the latest seizure to urge adoption of the Gun Kingpin bill, introduced in May to the New York State Senate, which would create the offense of operating as a major firearms trafficker for anyone selling more than 20 guns in a year without a license.

“Right now, a person who sells 10 illegal guns in New York faces the same penalties as someone who sells 10,000 – a minimum of just five years in prison,” said Vance. “Our proposed Gun Kingpin statute would create an A-1 felony for selling 20 or more illegal firearms, and would carry a minimum sentence of 15-years-to-life in prison.”

Vance’s office, in conjunction with the NYPD’s Firearms Investigation Unit, say they have brought down 23 major gun trafficking rings since 2010, issuing indictments against 74 individuals.