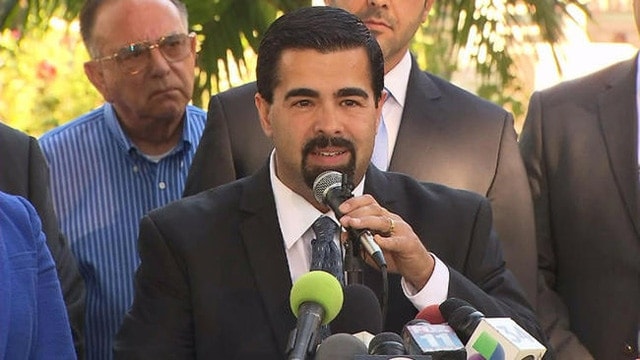 Daniel Crespo was accused of physically and mentally abusing his wife and children for nearly three decades before he was fatally shot by his wife in 2014. (Photo: Los Angeles Times)

The woman who shot and killed her husband, Bell Gardens Mayor Daniel Crespo, during a domestic dispute in their California home more than two years ago, pleaded guilty to voluntary manslaughter last week.

Lyvette Crespo, who said she fired in defense of herself and her son, tentatively faces three months in a county jail. Under the plea bargain, Crespo must serve 500 hours of community service and complete an anger management course. She must also serve five years of probation.

Formal sentencing is scheduled  Jan. 5, but Crespo still has the option of withdrawing her guilty plea if Los Angeles Superior Court Judge Kathleen Kennedy decides not to accept the disposition as is.

Crespo originally wanted to plead no contest, which would have kept her from serving jail time, but prosecutors rejected the plea and insisted she plead guilty. Crespo eventually took the advice of her attorneys and entered a guilty plea.

“She should plead guilty to what she did,” Deputy District Attorney Beth Silverman said outside of court. “The factual basis is that she shot him three times in the chest.”

Without a plea deal, Crespo’s case would have gone to trial, where she would have faced up to a 21-year sentence, along with 10 years for using a firearm.

Crespo never denied the fact that she fatally shot her husband during an altercation on Sept. 30, 2014, but has maintained it was an act of self-defense. Likewise, the couple’s 19-year-old son, Daniel, Jr., who was punched in the face by his father moments before the shots were fired, corroborated her account of what transpired that day.

The defense argues that Crespo and her two children, both of who have supported their mother in the months after the fatal encounter, suffered nearly three decades of mental and physical abuse at the hands of Daniel, Sr., despite him having a seemingly upstanding reputation in the community. Text messages exchanged between the couple on the day Daniel was killed points to an especially volatile relationship, marked with abuse and multiple infidelities.

But Daniel Sr.’s brother, William, has been outspoken in saying he thinks Lyvette should be locked away for a very long time, while the mother of Daniel and William said Lyvette killed her husband “with malice and in cold blood.”

“I’m hurt. I’m confused, all kinds of emotions are going on right now,” William told reporters outside of court. “I’m so shocked. I still can’t believe that she’s gonna get away with this. … She should pay for what she did. She killed my brother.”

Lyvette’s attorney, Roger Lowenstein, said with the plea deal on the table she can start the healing process from what he described as 28 years of torture.