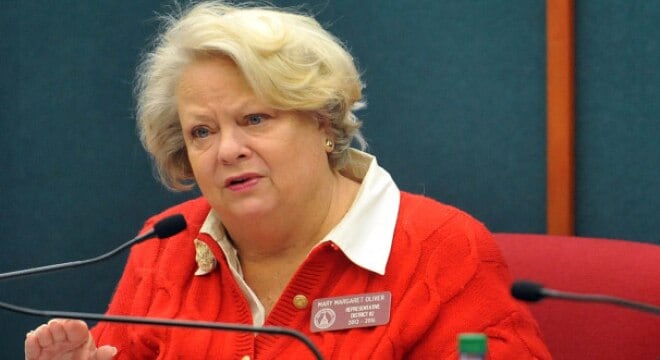 Georgia State Rep. Mary Margaret Oliver is back with a sweeping proposal to ban most semi-automatic firearms although the same legislation tanked in the Georgia House last session.

Oliver, a Decatur area Democrat, prefiled legislation late last month for the 2017 session without any co-sponsors. It would prohibit the possession, sale, transport, distribution, or use of guns classified under it as “assault weapons” as well as detachable magazines capable of holding an arbitrary number of cartridges and some types of ammunition.

It is largely a carbon copy of a bill she proposed last year that never left committee in the Republican-controlled legislature but Oliver feels it is a bridge to a conversation on gun violence.

“It’s a bad political time to have a smart, open, honest discussion about guns,” said Oliver, as reported by the Valdosta Daily Times. “But I do not choose to be silent on this issue.”

Oliver’s new measure, HB 10, is drastic in its approach to gun prohibition, exceeding other such bans in effect in New York and Connecticut in its scope.

Besides a list of guns banned by name, any semi-automatic rifle with a detachable magazine and one or more cosmetic feature would be prohibited. Similar rules apply to handguns and shotguns.

Unlike assault weapon bans established in other states, there is no provision for grandfathering affected guns or magazines already in circulation in Georgia. Those with prohibited items would be mandated to move them out of state, modify them to comply with the law, destroy them, or hand them over to state police. Also, varieties of .50-caliber ammo broadly classified under the bill as incendiary or armor piercing would be banned.

The Georgia Bureau of Investigation would be empowered to seize guns, ammo and magazines listed under the ban while the bill outlines enhanced penalties for those with assault weapons that would include imprisonment for a mandatory minimum of two years. Those found with prohibited magazines would incur a $100 fine for the first offense and a felony for subsequent violations. There is also a mandatory reporting requirement for guns found missing or stolen.

House leaders predict Oliver’s rebooted bill will get much the same treatment as it did last session. “While I respect Rep. Oliver’s convictions, her proposal remains a non-starter,” said House Speaker David Ralston, R-Blue Ridge. “In Georgia, we will continue to preserve the protection that the Second Amendment provides.”

In addition to the ban proposal, Ralston will see other familiar gun control proposals rehashed by chamber Democrats in 2017.

Rep. Keisha Waites, D-Atlanta, re-introduced legislation that would require new Georgia applicants to complete mandatory firearms safety training in order to apply for a weapons carry license. Entered as  HB 11, it is similar to a failed measure she backed last session.