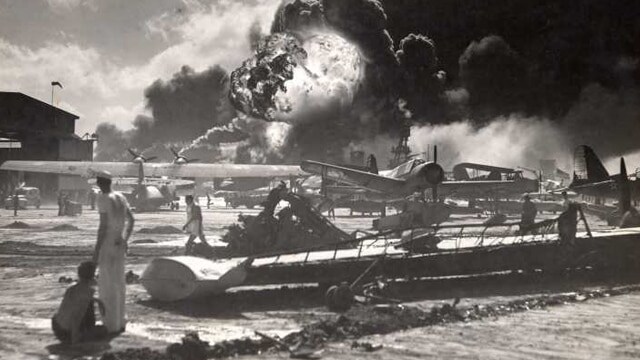 The U.S. Navy held a ceremony Wednesday that began at 7:55 a.m., marking the moment 75 years ago that Japanese planes descended on Pearl Harbor, launching an isolationist nation into war.

“All hell broke loose,” said Edward Waszkiewicz, then a fireman in the Navy who was there when it all began. “I thought the end of the world was coming.”

For 99-year-old Sharitt Baker, the machine gun fire is vivid, even today. “A Japanese bomber was down pretty low, about 200 feet,” Baker told the Topeka Capital-Journal. “You could see the pilot. We got behind the buoy.”

Baker said the Japanese machine gun fire ricocheted off the large metal buoy he and another sailor hid behind. “It sounded like you were ringing a big bell,” he said. “The bomber had dropped its bombs already, then he strafed us. Pretty soon, he strafed us again.”

A crewman on Baker’s ship, the USS Ralph Talbot, manned a .50-caliber machine gun, firing off 1,500 rounds and downing at least one Japanese plane.

“I wasn’t ever scared,” said Baker. “I was confused. We didn’t know what was going on.”

By the end of it, 2,403 Americans were dead, 21 ships had sunk or were damaged and more than 300 aircraft were damaged. The next day, President Franklin D. Roosevelt, in his third term and paralyzed by polio from the waist down, insisted on walking to the podium to address Congress.

“Yesterday, December 7th, 1941—a date which will live in infamy—the United States of America was suddenly and deliberately attacked by naval and air forces of the Empire of Japan,” he said, adding “No matter how long it may take us to overcome this premeditated invasion, the American people in their righteous might will win through to absolute victory.”

In the 75 years since the attack, America and Japan have forged an alliance, one that’s never been stronger, according to Defense Secretary Ash Carter.

Later this month, Japanese Prime Minister Shinzo Abe will join President Obama in a visit to Pearl Harbor, marking the first of its kind visit for a sitting Japanese leader. In May, Obama visited Hiroshima, the site where the U.S. dropped a nuclear bomb to end the war with Japan. He was the first American president to visit the city.

Returning to Pearl Harbor this week, 103-year-old Jim Downing served on the USS West Virginia. He said the memories of that day are fresh, as if it was just last week he was fighting fires and checking name tags of the dead so he could write personal notes to their families about how they died.